All right, handful of people who see this blog, here’s the deal.

This was something of a running portfolio before, while I worked for a student publication and wasn’t worried about bosses being mad at me for posting our stuff. But following the lead of several friends, I’m going to make this a photo blog to showcase some of my shots, including ones that don’t get published, and some of the background of them.

Even if no one looks, there’s always value to self-reflection.

To kick it off, here are some of my favorite shots of my college career, where I cut my photography teeth before busting out into the real world, in chronological order.

One of my first portraits, of an organic farmer just to the south of Lincoln, which was in turn part of my first photo stories. I started at a farmer’s market near campus and wanted to look in-depth at one of the vendors. Her name’s Chareuth, and she and her family were incredibly patient and accommodating, even when I showed up at 4 a.m. when they loaded their truck. I think they respected that. Lesson: Show up for all of the story, even – or especially – if it means getting up at 4 a.m.

A shot at Wyuka Cemetery. I showed up early for something the reporter had arranged and wandered around, getting my bearings and grabbing images of the place. Good thing, too, because what the reporter arranged was a totally staged and unusable shot of some local ROTC kids, thereby displaying for all the world that she didn’t understand this career yet. Lesson: Be early and don’t rely on what the reporter sets up. 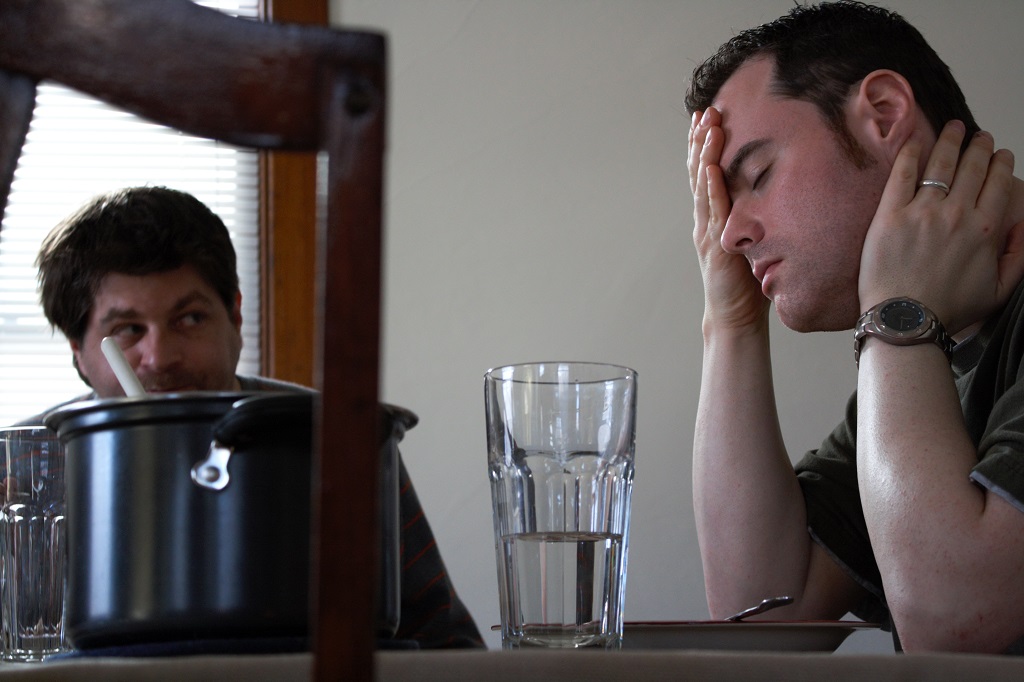 These two were graduate students and were engaged, though Nebraska wouldn’t let them marry. I worked with them for a story on the effects of DOMA shortly after the U.S. Justice Dept. announced it would no longer defend the law forbidding federal recognition of same-sex couples’ marriages. The student working as my editor loved this. Lesson: Quiet moments are good, too.

This boy is autistic and was playing in the lights around the Nebraska Capitol, which were colored blue for World Autism Awareness Day. Probably 100 people were there earlier for the event, mostly families and friends of autistic kids. Most of them had left by now, but I hung around. Lesson: Staying until the end is hardly ever a mistake. 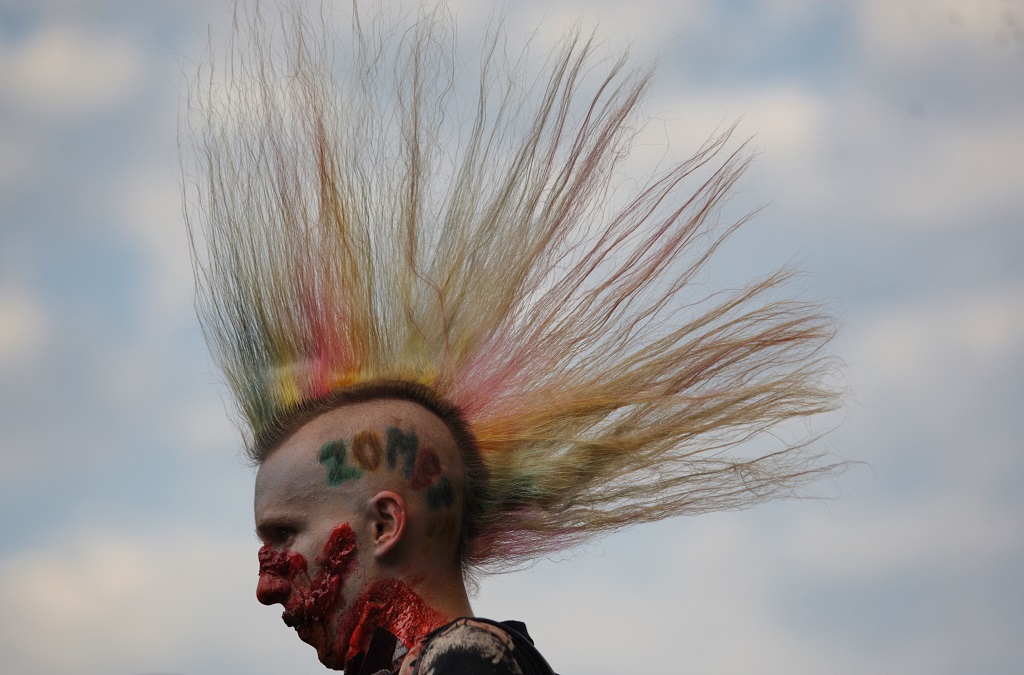 This dude was part of Lincoln’s annual Zombie Walk and threw himself into the spirit of the event with gusto. Most of the paper’s photographers went, and this, from one of the least experienced photographers, was the centerpiece of next day’s coverage. But even then my editor said I could’ve gotten it with better light from the sunset. Lesson: Don’t rest on the laurels.

This fellow was acting in a crazy play about crazy, overbearing parents. In this particular scene, he’s trying to psych himself out in preparation for a murder (yes, that crazy). Plays are great to shoot, with ready-made moments and perfect lighting. Lesson: Hardly anything’s as easy as shooting plays.

This man was part of the ill-fated Occupy Lincoln camp, which was part of the ill-fated Occupy Wall Street movement. In general he and other protesters were expressing their rage and disgust at what they perceived to be money’s overarching power over politics and politicians. This camp was one of the longest-lasting in the country but eventually also fell to eviction. I spent several days with them, from beautiful fall to bitterly cold winter. Lesson: This job means going through a lot of what the subject’s going through.

This was my first true photo illustration, to accompany my article about the first month after Don’t Ask, Don’t Tell’s repeal. I had spent most of the day agonizing over getting an image. Near deadline my roommate, who was in Army ROTC, agreed to salute in front of a flashlight cast on our wall. I had a goofy idea on what to do with it, but another photographer suggested layering in a rainbow flag, which I couldn’t do. He helped, and this is the product. Lesson: Teamwork. 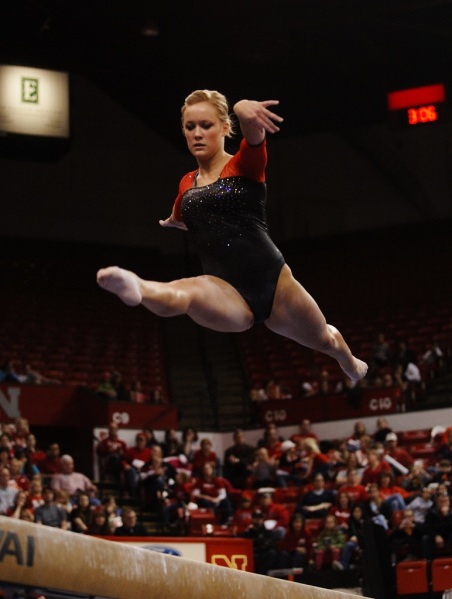 A member of UNL’s women’s gymnastics team performing on the balance beam. Among all the sports, I like shooting gymnastics the most, probably because it’s easiest: There are interesting opportunities for light and shadow and of course movement, and it all stays in one relatively small space. This time was a bit frustrating; I couldn’t find the right angle. I moved all around the room until this one. Lesson: There’s always another vantage point, and it’s often lower. 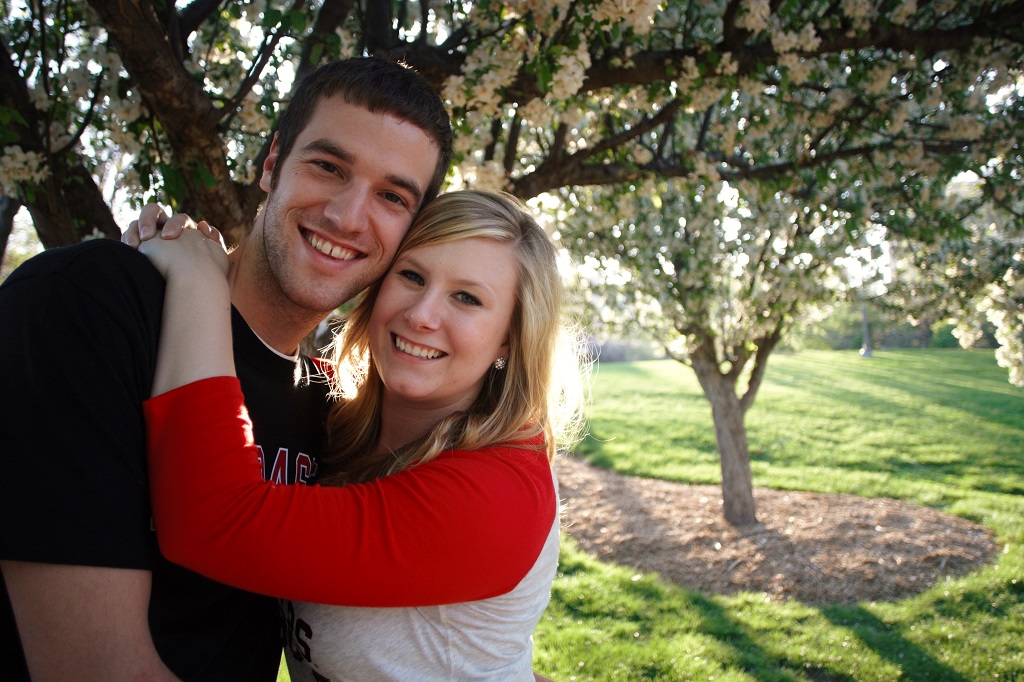 The woman here was one of my editors at the Daily Nebraskan; her fiance, with her, also worked there. She had asked me to take some preliminary engagement photos to use in invitations and such things. I was flattered but also concerned, because I wasn’t comfortable with portraits and didn’t think I was very good at them. But they were very patient and happy, which is about as good as it could possibly be for portraits. Lesson: Practicing uncomfortable things with comfortable friends is a good start.

This was in the Nebraska Capitol the last day of the 2012 spring session, when yet another bill related to the Keystone XL oil pipeline was up for a vote. I’d spent most of the day in the legislative chamber, with few interesting photos to be had. Near the end of the session I stepped out into the rotunda and noticed interesting light streaming through a window and decided to make an image of it. Luckily for me, all of the people here ended up having something to do with the story. Lesson: Listen to instincts.

This girl was dancing in front of the Nebraska Union for a student event called Fiesta on the Green. My editors were very happy with it, even more than I. I got it by standing in the middle of an empty fountain, which was in a bit of a pit in the square. Lesson: If I can go somewhere I usually can’t, I usually should.

This was for a story on Native American UNL students, who are present at that Great Plains university in exceedingly low numbers. They were mixing dough for Navajo tacos to be sold at a fundraiser the next day, and they were obviously having a good, goofy time of it. I believe this happened a day or two before the article, which took weeks of work, would run. Lesson: Sometimes people tell me when I should photograph them, though often not deliberately.

That’s it (and probably quite enough) for now. Next I plan to through some assignments from the Springfield News-Leader in Missouri and my personal stuff, and hopefully make time to fill in the past summer as well.

If you’re looking — thanks.

One thought on “Restart”