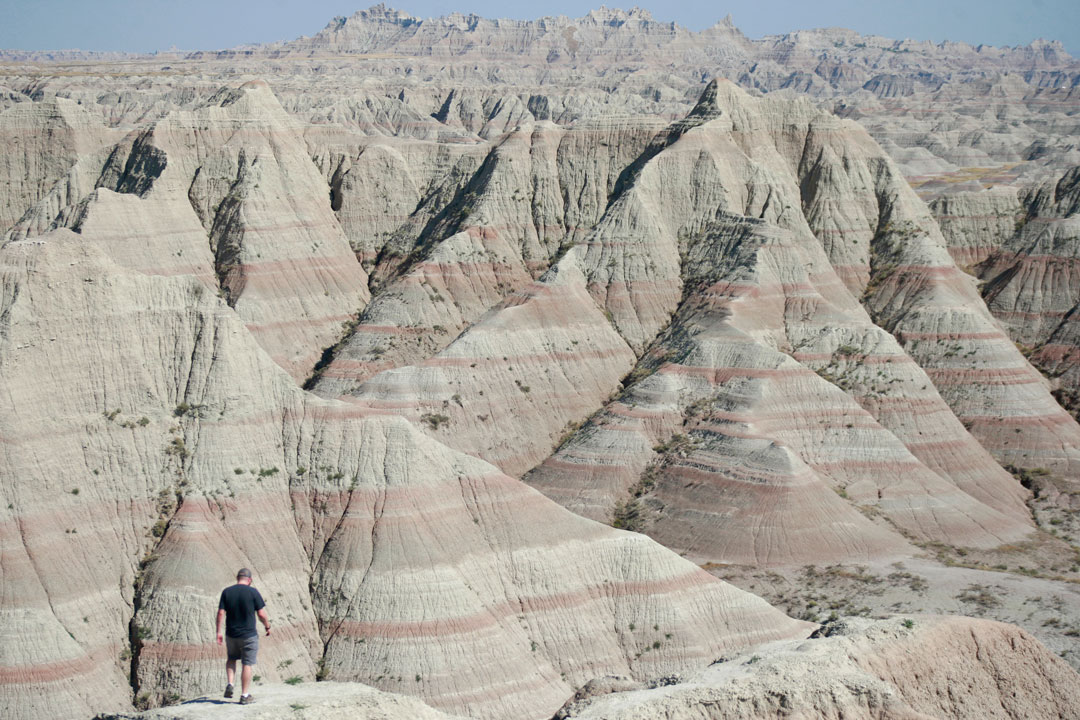 South Dakota’s plains of grass and corn and sunflowers stretch smooth and gentle for hundreds of miles until they reach the Wall. Half a million years of water and wind have carved a jagged rampart here that runs about 80 miles long. In another half a million years, it’ll be gone. But for now, the heart of Badlands National Park looms over the ground like the steeples and rooftops of a petrified city. Their sides reveal around 70 million years of history, including millennia of human conflict and reverence that continue today. 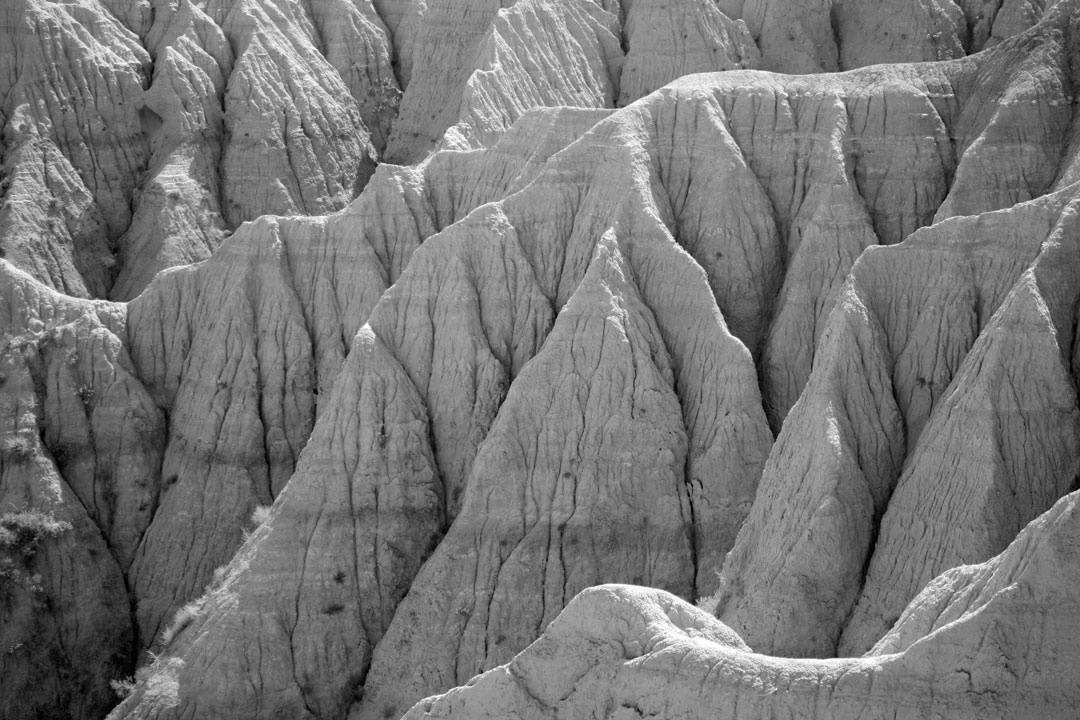 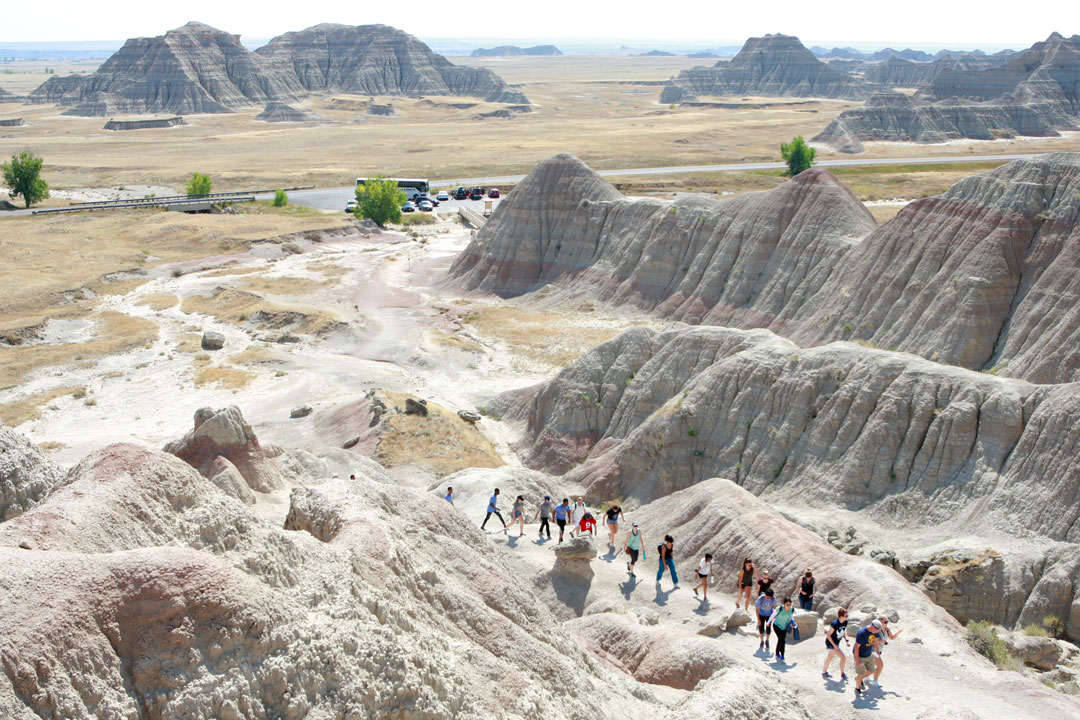 A loop southward from the interstate swoops through the park’s northern, busier half, giving the bulk of visitors a good sample of the land’s various personalities. One section near the main entrance holds a grove of junipers and cottonwoods, thanks to falling rocks that have compacted the ground enough to catch the rainwater they need. In other sections, erosion has gouged sharp ridges of chalky, crumbly, barren rock bleached enough to reflect a second dose of the sun’s heat. Toward the end of the loop, the smooth Yellow Mounds and prairie dog towns with thousands of yipping residents show a softer side. It isn’t all cuddly, though. During our drive, a coyote darted across the road and disappeared into one of the towns, then ran back a second or two later with a motionless prairie dog in its jaws.

It’s around this point that the road forks. Most people end their visit here, following the paved highway to the right straight out of the park. For the few who stay, the road forward becomes gravel for mile after brain-rattling mile. That was our path. A deeply sculpted butte with a spectacular reputation, Sheep Mountain Table, waited at the end.

The road cuts through pastures and actually exits the national park for a while, passing by a mostly abandoned, creepy little town called Scenic. We got there in the late afternoon, giving it an eerie sort of light. The strangeness continued as we crossed back into the park: The carved slopes in this single area sport countless mushroom-like formations that looked like a crop of foot-tall Stonehenges. They’re essentially tiny buttes, capped by rock that’s more wear-resistant than their skinnier bases. We were alone. A mile or so and the mushrooms were gone. The rutted road soon became impassable for anything but four-wheel-drive trucks. The last couple of miles would be on foot.

Somewhere along this final stretch, we entered the Pine Ridge Indian Reservation, a century-old monument to the damage the United States has done to the Oglala Lakota tribe. Its residents are exceptionally poor and wounded by alcohol sold by the millions of cans across the state border in Whiteclay, Nebraska — an ongoing lawsuit by the tribe aims to put an end to that. (For more information about it, I recommend the University of Nebraska’s nuanced, well-done reporting here.)

The government pushed the tribe into this reservation as part of a treaty it soon broke by taking the sacred Black Hills nearby and other lands. U.S. forces killed at least 150 adults and children near this section of the Badlands in 1890; the Wounded Knee Massacre would be the final real conflict between the indigenous people of the Plains and this country.

This suffering and other cultural history have made the area sacrosanct to tribe members. Some have tried to work out a way for the tribe to manage this section of the park instead of the U.S. National Park Service, though the effort seems to have stalled. Still, showing respect while here strikes me as an absolute requirement. We walked quietly on the gravel as bright blue birds flitted around. They seemed to be keeping an eye on us, or maybe just keeping us company. Tantalizing vistas occasionally appeared to one side or the other, teasing what waited ahead. 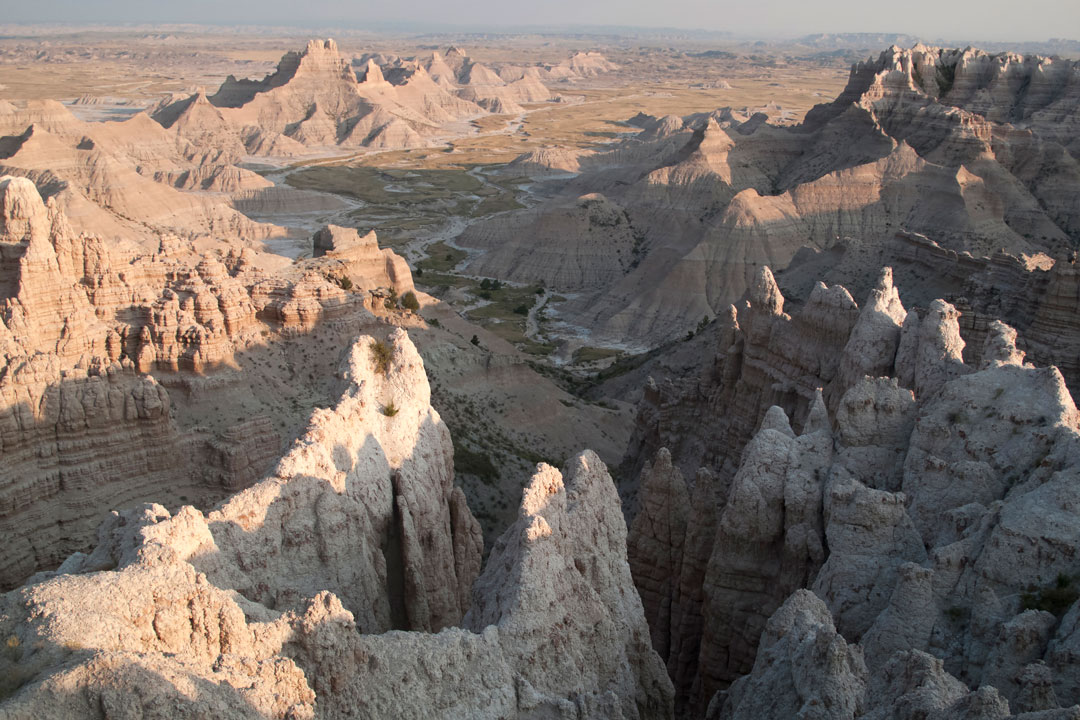 It wasn’t until the last few dozen feet of the road, which ends at an overlook, that the full splendor of Sheep Mountain Table opened up around us. The only sounds were a soft wind rustling the junipers and some buzzing bugs. I just stood there for a few moments staring in slightly misty-eyed awe. 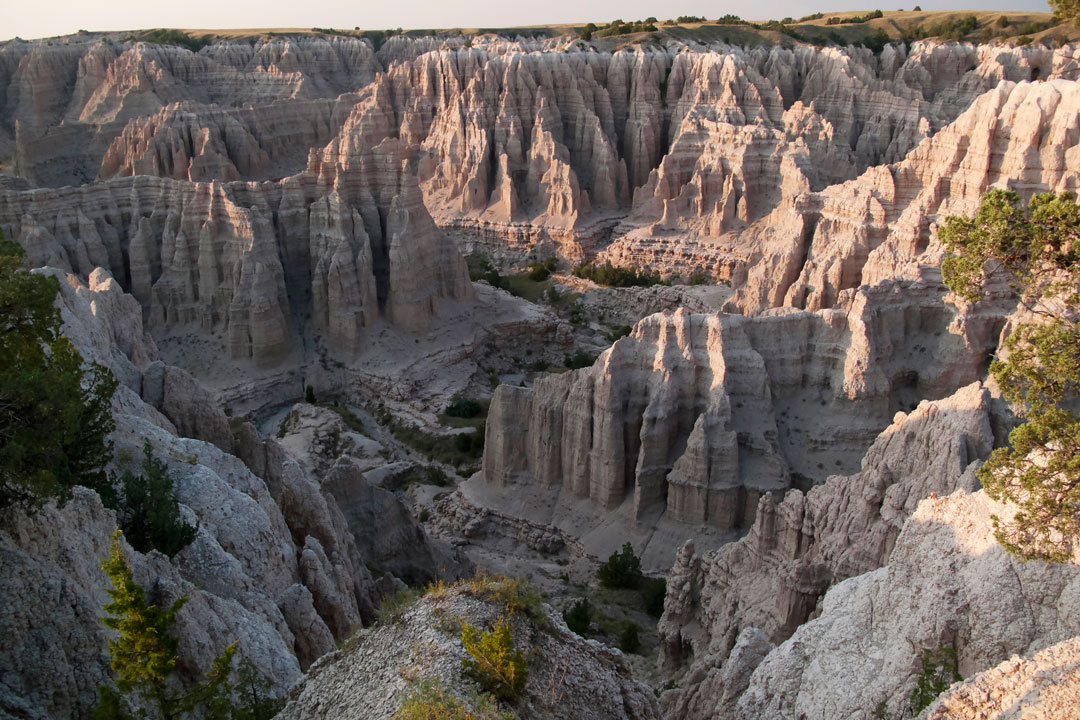 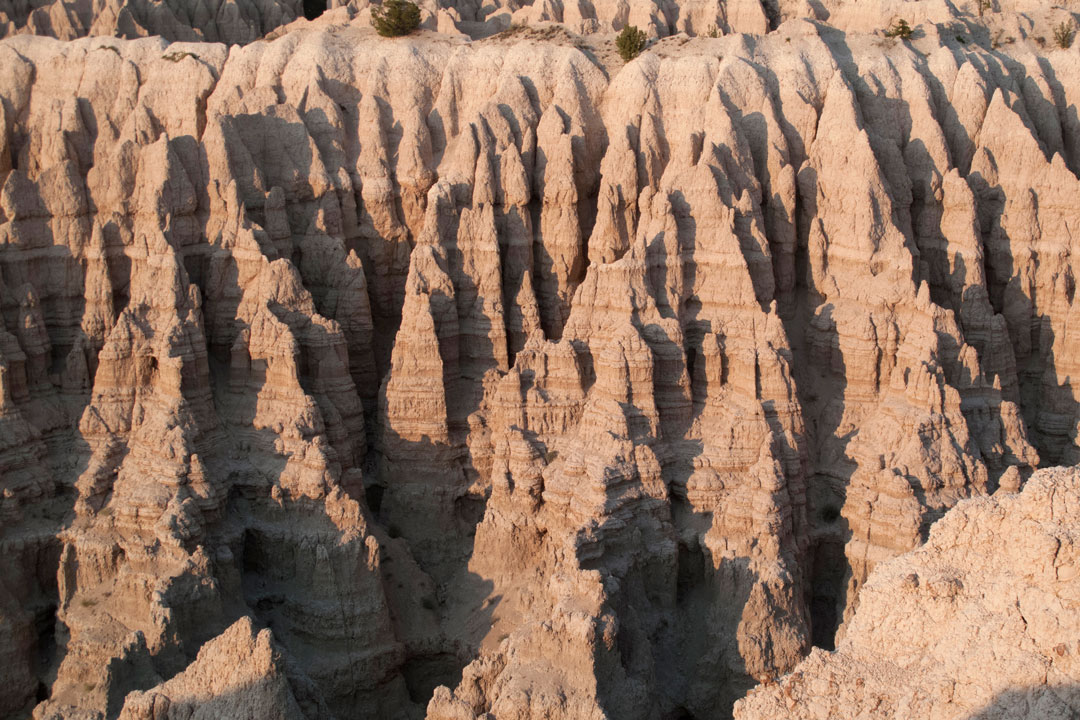 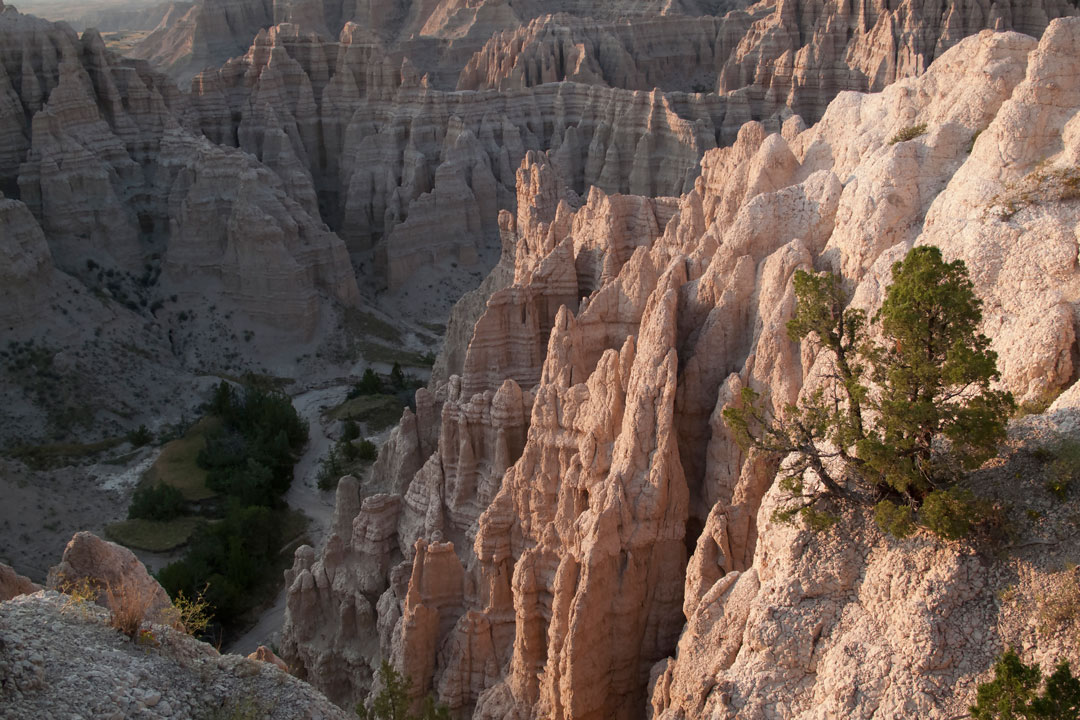 I stayed as long as I could, but daylight was fading. It was the perfect ending for the day. We drove back to the hotel in Rapid City under the slimmest sliver of a crescent moon.

Thanks for looking. Up next, let’s talk some more about those Black Hills.