The ravens’ calls — gravelly croaks and hollow-sounding clop-clops — echo through the Giant Forest. Western bluebirds flit among the giant sequoia trunks, living pillars that seem to hold up the sky.

Neon-green wolf lichen, fuzzy from a distance but intricately branched up close, coats living and dead pines. Cool, clear streams trickle through thickets and meadows of shoulder-high ferns. Morning and evening sunlight slants through the trees. A soft, low buzz of bees and flies and wasps going about their days sounds from every direction.

It’s the stuff of fantasy, and it’s real here in Sequoia National Park.

We got acquainted with a couple dozen sequoias at Yosemite National Park three years ago, but there’s nothing like walking around a true sequoia forest. There’s no mistaking them: sturdy, cinnamon-colored, knobby and spread at the base like the legs of a gargantuan elephant. Thousands of the trees fill these woods, many soaring 20-some stories up.

They are humbling things. Sequoias are the world’s biggest trees and among the oldest, reaching 3,000 sproutdays and up. No single person can watch them grow to maturity, and only indigenous nations have been in the area for the generations it’d take to do so.

We can learn from them. I don’t mean cheesy lines like growing where you’re planted — sequoias grow only in very specific conditions in fewer than 100 groves on the western side of this single mountain range. I mean the lessons in fire scars reaching up their trunks that are bigger alone than most trees east of the Rockies.

The scars can heal, but many don’t completely. Some yawn so wide their trees are essentially hollow. One tree had nothing left but the lowest branch (still green) on a half-incinerated trunk. Many bear car-size holes and windows. It’s incredible that many of them are still alive. Some aren’t — just tall, charred ruins.

Yet sequoias don’t just resist natural fires. They need them to unlock their cones and for the seeds inside to successfully sprout and grow. Since we’ve stopped suppressing all fire and the park began holding prescribed burns, normal-size, Christmas-tree-shaped sequoia saplings grow all over the place. Their dead elders and the flames clear out the space they need. Death, life, destruction and healing all meet within the sequoias, and the trees surpass all others in the sheer amount of living they do. Now there’s a lesson.

It’s the end of summer and the driest time of year, but Kaweah River and its forks still flow strong and clear through house-sized granite boulders — demonstrations of how powerful these streams get in the spring. The greenery is most intense along the streams, where sycamore roots clutch the rocks like clenched fists. But all of the Sierra Nevada foothills are coated with dusty life: California blue oaks, scrub jays and acorn woodpeckers, jimsonweed, bats, golden hillsides of grass.

These hills are among the few places on the planet with a Mediterranean climate, according to the National Park Service, meaning a mild and wet winter and hot, dry summers. It seems like a tough place to make a living, but there’s more biodiversity on these lower elevations than any other ecosystem in the park. We might’ve missed it if we hadn’t camped there.

Among the hills’ inhabitants, until the last 100 years or so, were Native Americans, specifically the Mono or Monache. So far I haven’t found out much about the U.S. removal of these people from their homelands or whether it had to do with the parks. But they are gone from this place now; many live in nearby North Fork. Even John Muir, grandfather of the Sierra’s national parks, was an idiot when it came to them, writing that they had “no right place in the landscape.”

Only a few obvious signs of native peoples’ centuries here are left around Sequoia, mainly the pictographs and rock hollows for grinding acorn flour around Hospital Rock. There was once a village here. The rock remembers it.

Ryan and I drove one evening to the big overlook halfway up the foothills to see the twilight and night sky. The sky there is grainy from the sheer number of stars, and Saturn gleamed bright in the west.

After a little while, something as bright as Saturn moved directly overhead, zooming silently and steadily across the sky from west to east and fading almost completely when it neared the east horizon. I think it was the International Space Station catching the last sunlight before entering Earth’s shadow.

Underground streams carved and redeposited Crystal Cave and its glittering ribbons, curtains and spikes inside a mountain of marble. But here and there a piece is missing. White domes are dulled and stained gray by human hands that climbed and grabbed during years of self-guided tours.

It’s a violation, one of many recorded in Sequoia.

One of the first non-native people to arrive at Giant Forest thought a grove of rare and colossal trees and glowing meadows was a great spot for a cattle-raising and slaughtering operation.

The forest’s Bear Hill got its name from a trash pit that attracted bears (and tourists) daily. As the Park Service knows now, bears with human food become aggressive toward humans and each other in their search for more, often meaning they must be killed.

Smog and ozone from the San Joaquin are so common above Kaweah that the signs and pamphlets point it out. Pamphlets also discuss climate change, which changes the environmental balance that the park’s inhabitants need and can make them move or become more vulnerable to danger.

Even our hair has to be cleaned from Crystal Cave. Our Sequoia Parks Conservancy tour guide through the cave noted all of these human footprints. She also asked what good our presence might be doing. Education, she and other group members suggested. Seeing this underground beauty. Valuing it and extending that feeling to other caves and natural places. Telling others about it and learning from our mistakes.

It was a very journalist sort of answer. My profession often intrudes into people’s lives and business, and our presence even as quiet observers affects our subjects. But it’s worth it, we (and usually they) decide, to hear stories, to share what we’re all doing and to learn.

The struggle and key is getting the right balance, or at least a right one. We experienced this when we spotted three black bears at different times in the forest.

We had seen a mother bear and her cub attract a roadside crowd in Yosemite three years ago, and we had seen countless people approach deer and feed squirrels right in front of signs imploring them not to. No one but us scared the animals off, as the signs asked, to try to keep them from acclimating to humans.

Our frustration with the others at the time came back when we saw the same roadside crowd in Sequoia. We parked and got out with a mind to immediately yell and scare away the bear.

But we saw it was about 100 yards away, the suggested minimum distance, and was oblivious to us. Scaring it from its search of food seemed as disruptive or more so than the crowd. So we left it alone. (Yell, don’t run, if a bear starts getting closer, or just move away from it before it notices you.)

The second bear we saw was in the road and bolted as soon as it saw us — the Park Service says many die in traffic collisions, so that’s good. The third came on another day near our trail, again a good distance away. At first we stood still and watched through binoculars. Then we quietly moved out of its way.

I couldn’t get to the top of Moro Rock.

Moro is Sequoia’s prime overlook: a granite big toe poking out of a forested sock above Kaweah Valley, broad from north to south and narrow east to west. Going up the short trail to Moro’s crown, you can see the flatness of the San Joaquin Valley 15 miles away in one direction and the barren, serrated wall of the Great Western Divide more than 10 miles away in the other.

It’s a fantastic view that triggered the most intense fear of heights I’ve ever felt. The trail goes up Moro’s narrow spine — 70-degree drops of smooth, bare rock fall away on one side or the other, and it might as well have been vertical. Sometimes the steps have a reassuring guardrail, but sometimes they have only a row of rocks arranged along the edge at knee-level — just high enough to trip over and fall to my death, my brain silently shrieked, a scenario it also visualized repeatedly. I shrank against the rock.

I made it most of the way before I had to turn around. I went back occasionally on all fours, feet first.

Next up, our day in Kings Canyon.

More than three months of overflowing rivers around the Twin Cities finally ended this month, leaving debris, tree trunks stained by muddy water up to above my height, and a sprout and seedling explosion around the Minnesota Valley National Wildlife Refuge in Bloomington. I took a walk there yesterday to see if the mushrooms and slime molds were more active yet. The answer was yes. This system of wetlands goes hand in hand with flooding, even months of it, so life carries on.

I’m not kidding about the seedlings. Maples a few inches tall and other young plants were as thick as turf grass on much of the Minnesota River floodplain after millions or billions of seeds carried by the flooding settled down and germinated. They’re a record of the flood as much as the lines on the trees: Thicker bands and patches of sprouts echoed the water’s direction and speed. Down in the marshier area, creeping plants regrew to their former size.

To cap off the hike, one last peek in a little ravine near the trail revealed the biggest crown-tipped coral fungus I’ve yet seen. Almost always, somehow, there’s some kind of prize at the end.

Happy summer, and thanks for looking.

Now that we’re getting above freezing during the day and dropping below freezing most nights, it’s starting to feel like a normal Arkansas winter up here. You all might recall my being dazzled by the delicate and varied forms ice took down south; something I didn’t appreciate fully there is that many of those forms depended on this cycle. When weeks go by below freezing, ice becomes monolithic — sheets of ice and blankets of snow. But when the process can start fresh each night, its results are more fleeting and more interesting.

For whatever reason, I’ve had the easiest time finding beauties like these this season in the humblest of places, sidewalk puddles. So I like to call them sidewalk art, crafted not with chalk or spray paint but with bubbles and H₂O.

Soon very different shapes will dominate the outdoors; some are already emerging.

Some real warmth is finally here, and warmth plus rain means hidden networks of tiny fungus filaments in the forest floor are popping out mushrooms. I’ve already paid tribute to the variety and strange, sometimes slimy beauty of these little toadstools here and here, but still the Ozarks have new kinds to show me, including the above beauties at the entrance of a Devil’s Den State Park cave.

I hope you had a good Memorial Day weekend — thanks for stopping by. 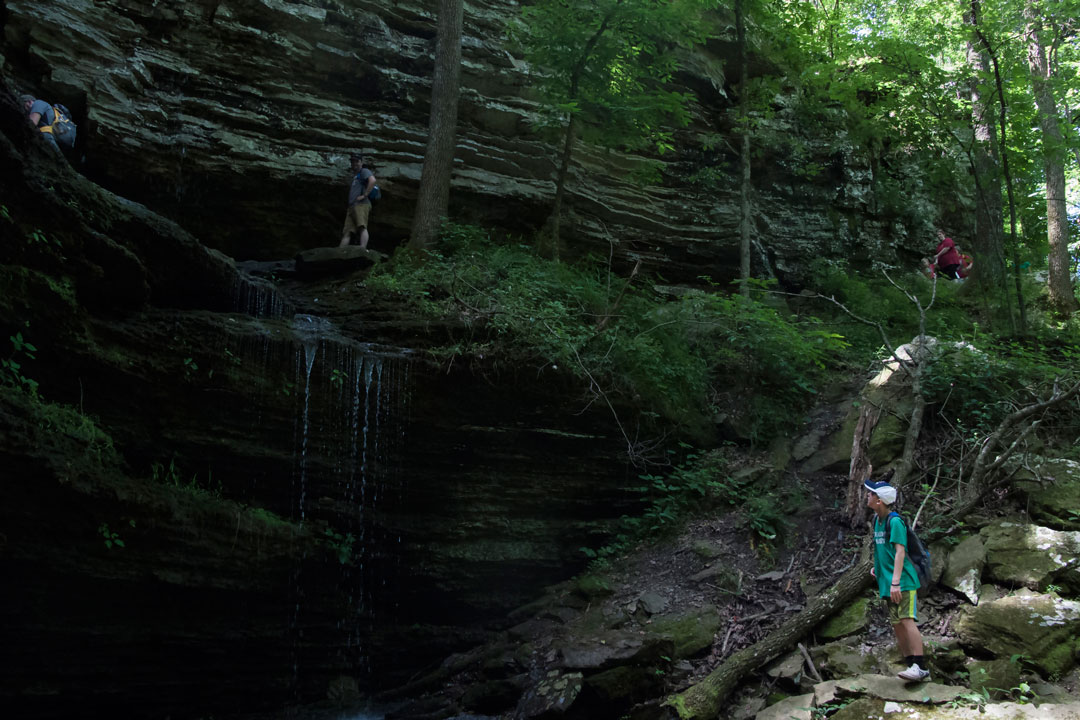