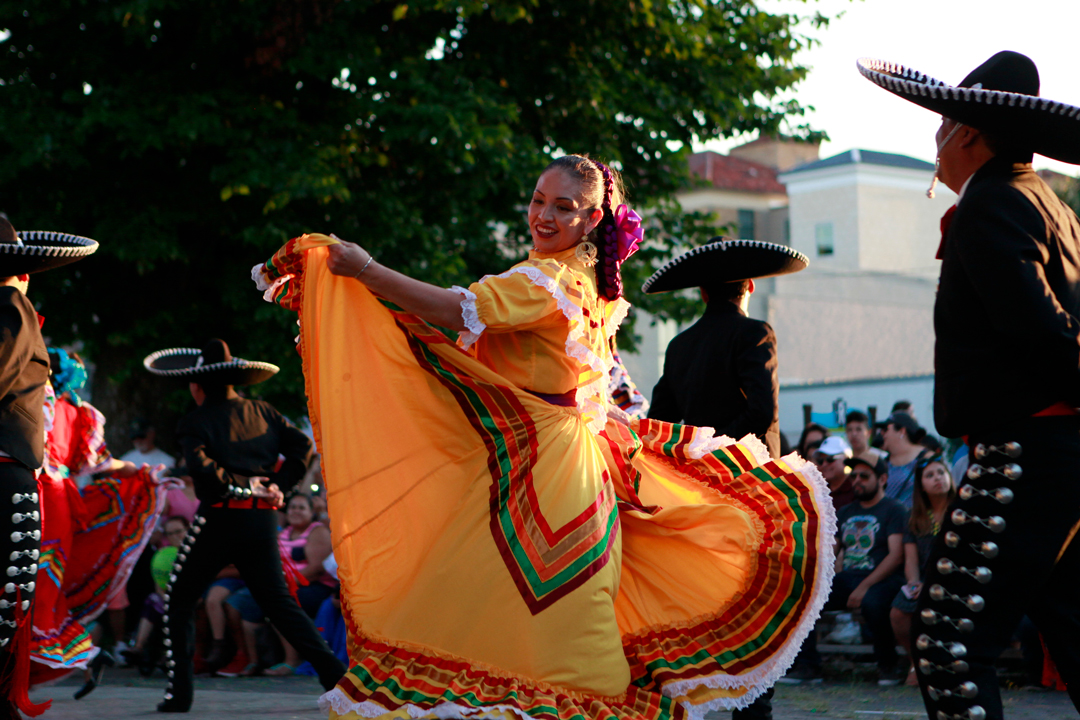 Labor Day weekend brought out the shindigs in Benton County, first with the Frisco Fest in Rogers, then Light Night at Crystal Bridges Museum of American Art in Bentonville.

The old Frisco Railroad at its height ran from Missouri to Texas to Alabama, and its arrival more than 130 years ago literally put Rogers on the map as an agricultural and passenger hub. Rogers these days is a bit different, not quite the agricultural hub of yore but much bigger and more diverse. The Latino folk dancers were my priority Friday night, but fire dancers and LED hula-hoopers from North Little Rock’s Arkansas Circus Arts and other performers held their own. 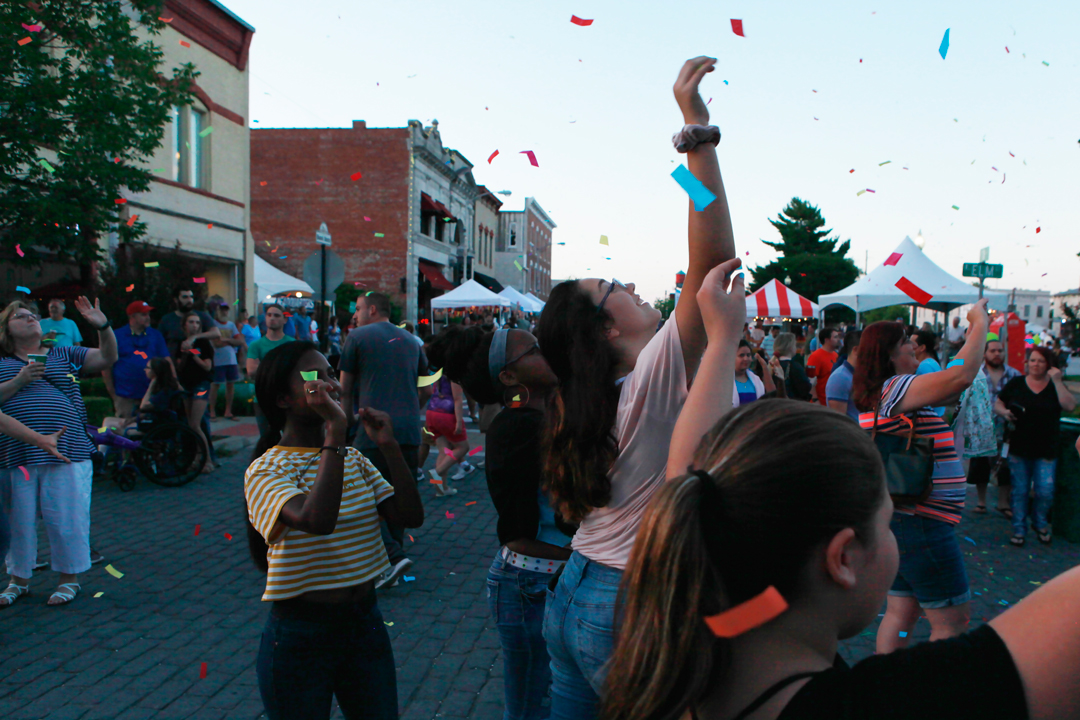 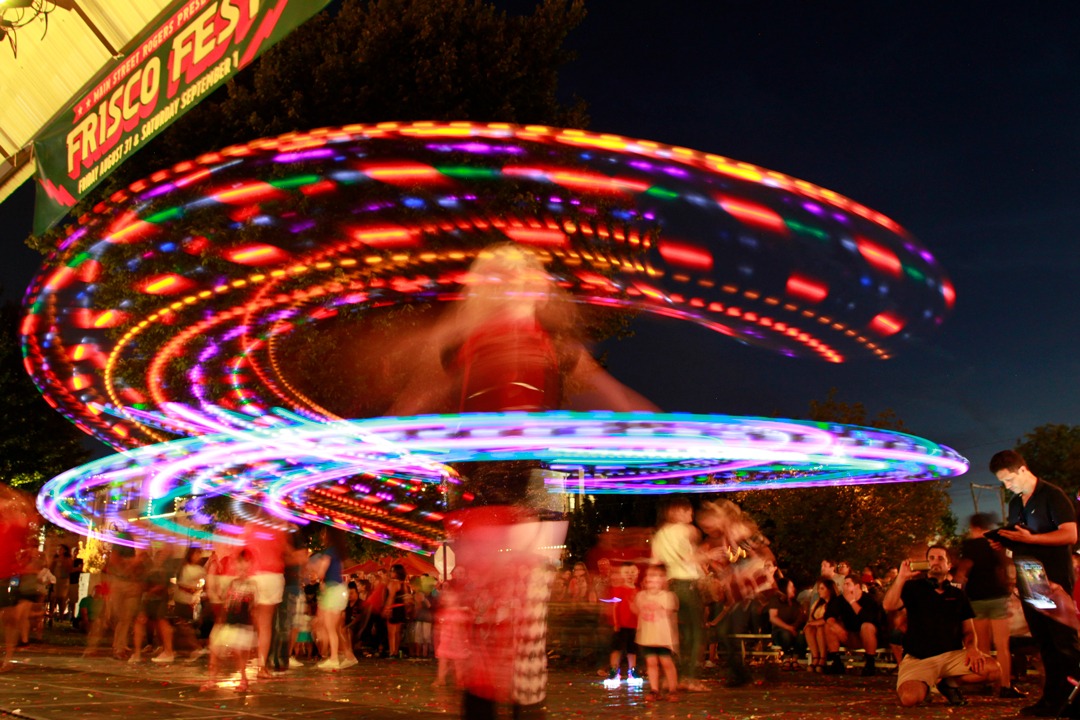 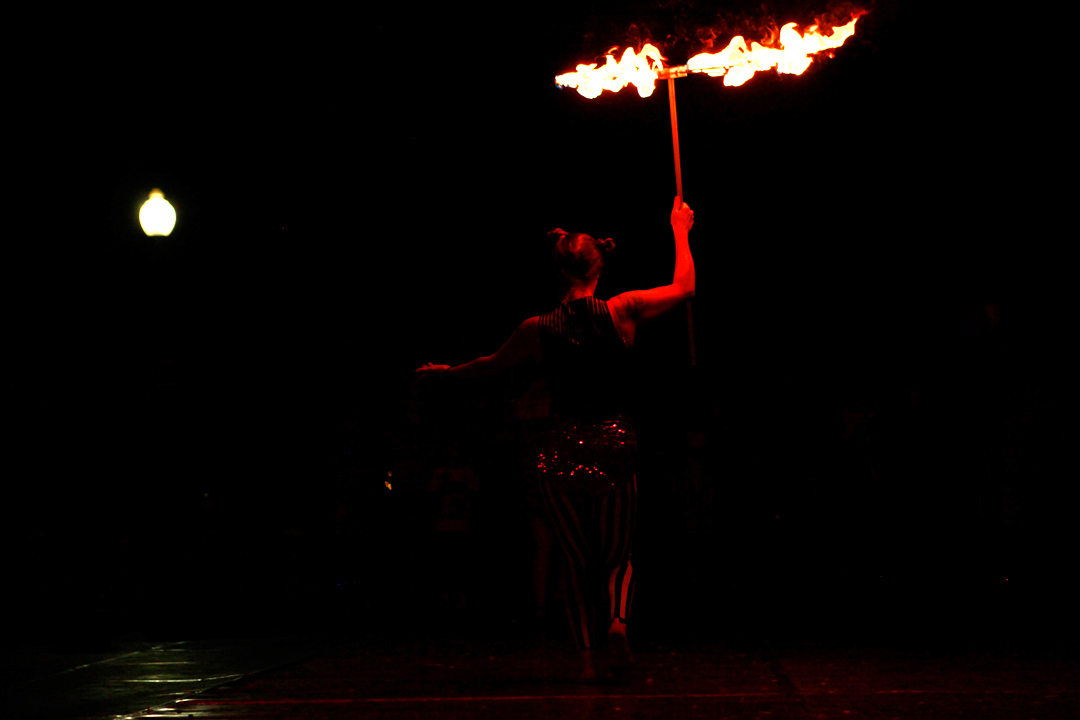 Low light and long exposures give the chance to capture something kind of remarkable: a person or thing in its four dimensions, not to get too Slaughterhouse-Five about it. In other words, it’s a nifty way to see movement through space and time. Some things, like that LED hoop making the boxy pattern, can only be seen properly that way. Maybe that’s true of most things, really.

Anyway, I kept thinking about it the next evening at Crystal Bridges, where the annual Light Night seems to be an excuse to play music and make as many kinds of light and color as possible. More fire dancers did their thing in a red-light ring, and traffic filled the road to the event most of the evening. Mars put on its own light show as well, if you can spot it. 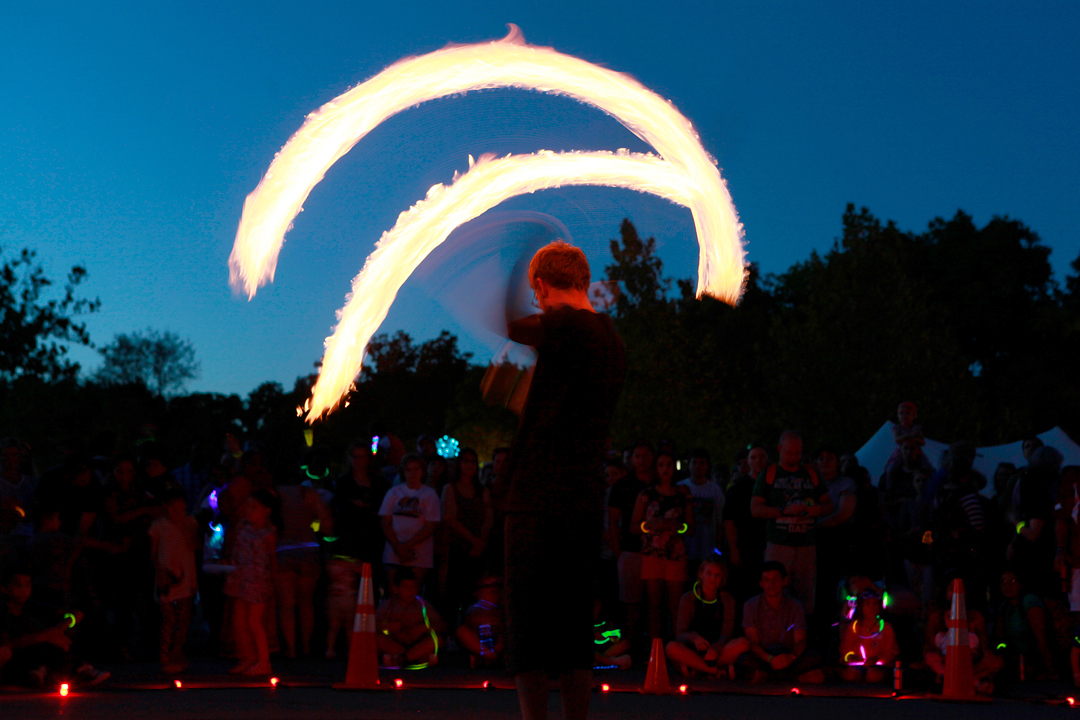 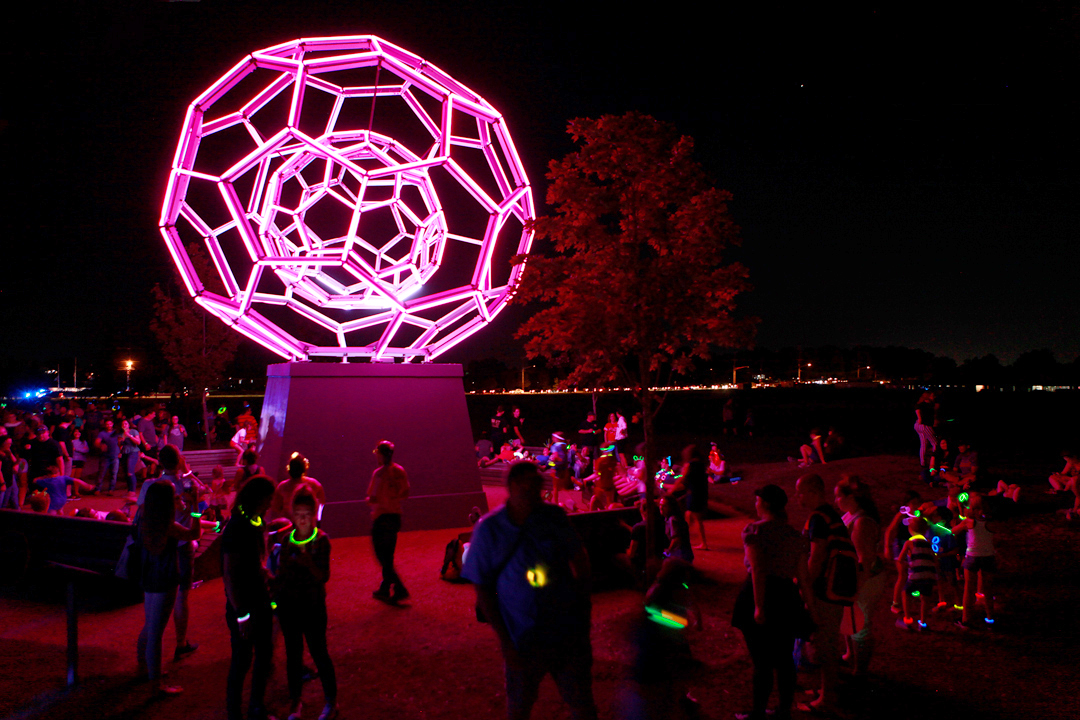 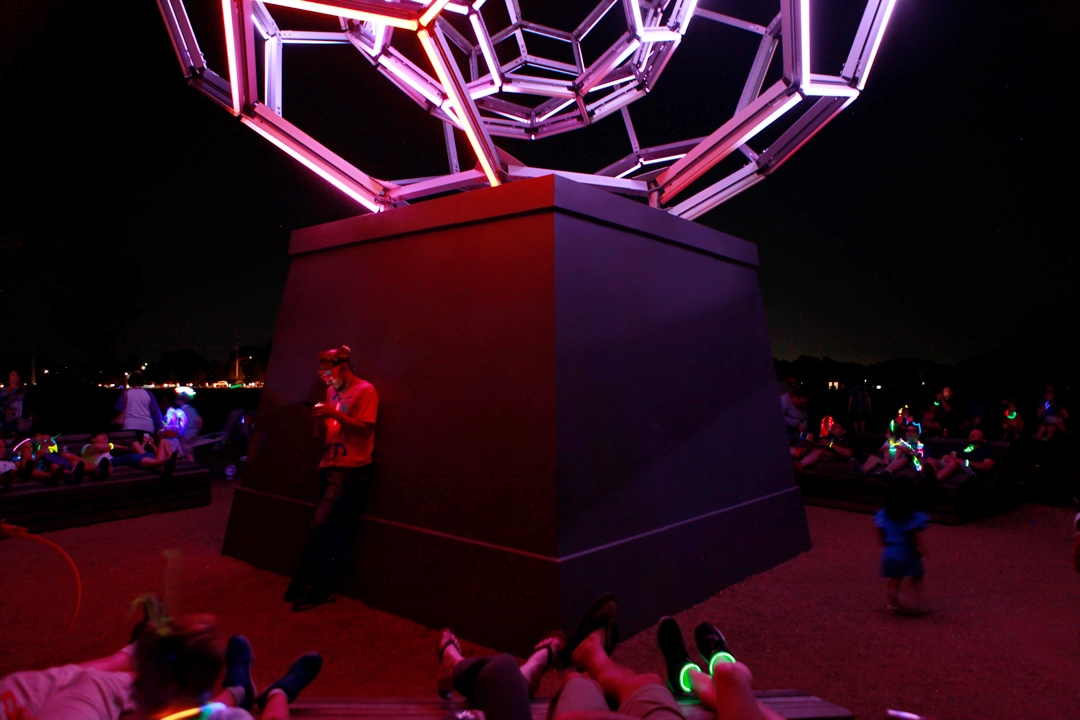 This is one of my favorite spots in Arkansas. It is a pain in the butt to reach.

These falls and their hollow are part of a creek that runs alongside Mulberry Mountain, former home of the old Wakarusa music festival. I never came for the music, but some friends and I hiked to the nearby Mountain Creek a little more than four years ago (I posted about it here). I’ve wanted to go back since. It’s no 100-foot Cedar Falls, but it is a lovely, peaceful little swimming hole in the middle of Ozark National Forest.

The hike there, on the other hand, was not peaceful. The path is unusually steep and difficult, mostly straight down the mountain and therefore deeply eroded and rocky. But worse were the gnats and flies. I don’t know whether one group of them followed me or if I was just the baton in a relay down the mountain, but the dots darting around in front of my eyes and the whining buzz in my ears were literally, maddeningly constant. One big specimen pursued my camera lens no matter how much I swatted at it. Every now and then a metallic blue, sinister-looking wasp would fly in a straight line over the path, ignoring me. If only the rest followed that example.

There would be no relaxing until I got to the valley floor. And that’s too bad, because on both sides was a smorgasbord of fungi like I haven’t seen in years, if ever. 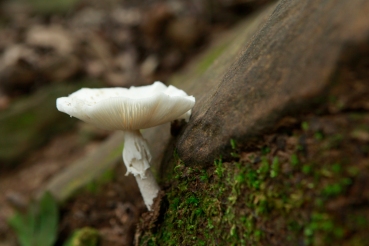 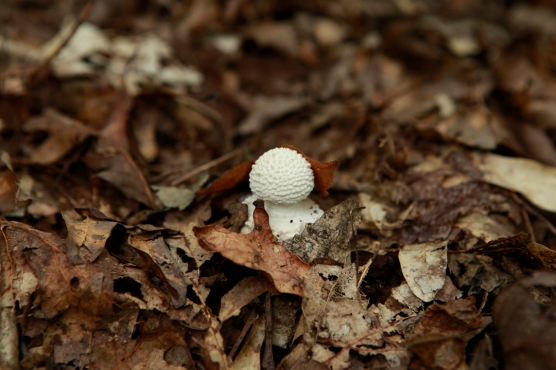 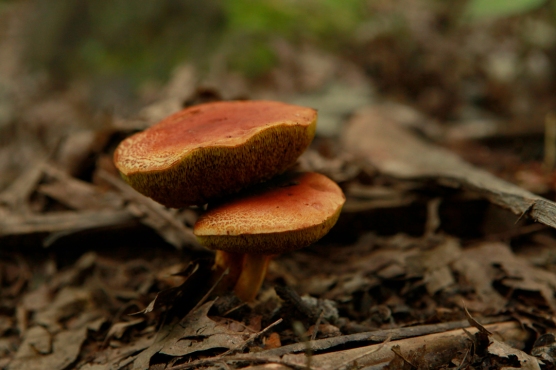 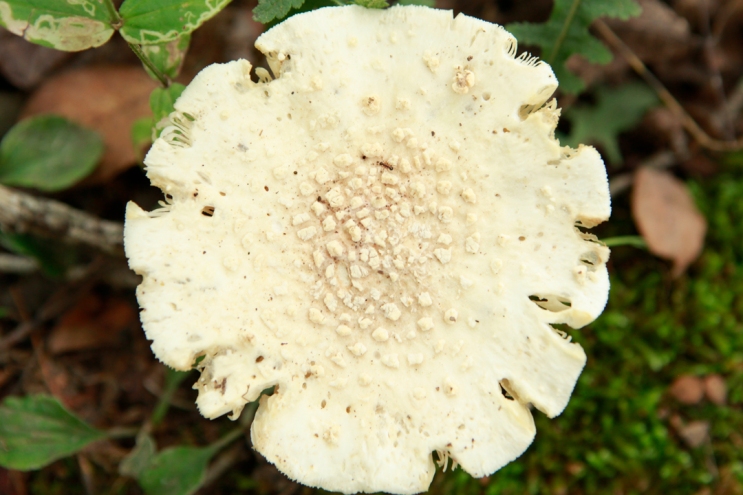 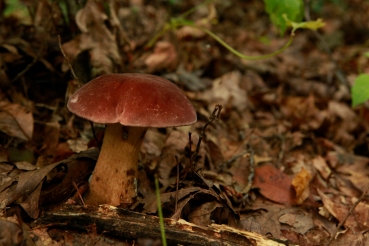 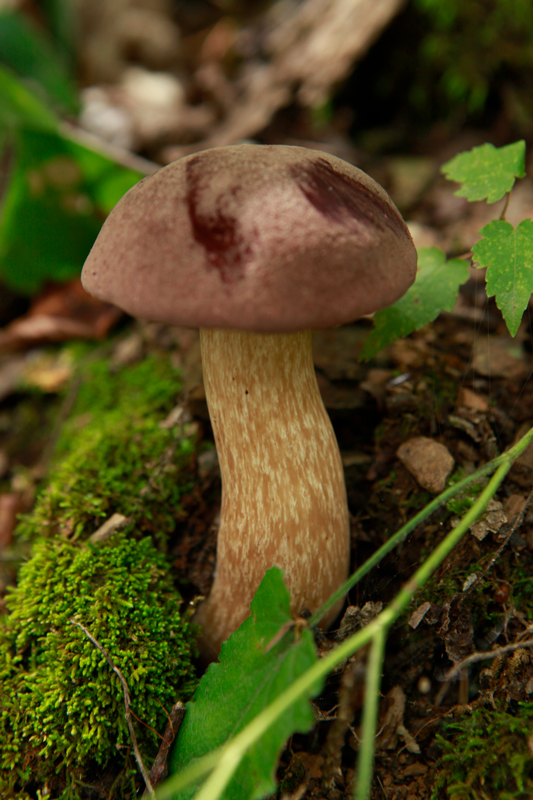 Some toadstools glistened wetly, while others looked soft as velvet. All were just the most visible part of a network of fungal filaments busy decomposing things beneath the surface.

I couldn’t spend much time with many of these beauties because of the gnats, but the bug issue surprisingly died down a bit when I reached the creek, where that sort of thing can be at its worst. I guess the spiders are more effective down there, since there were plenty of those, too. It seemed like I was the first visitor in a good while. The rest of you are missing a genuinely idyllic place, once you get past the rude, buzzing neighbors. 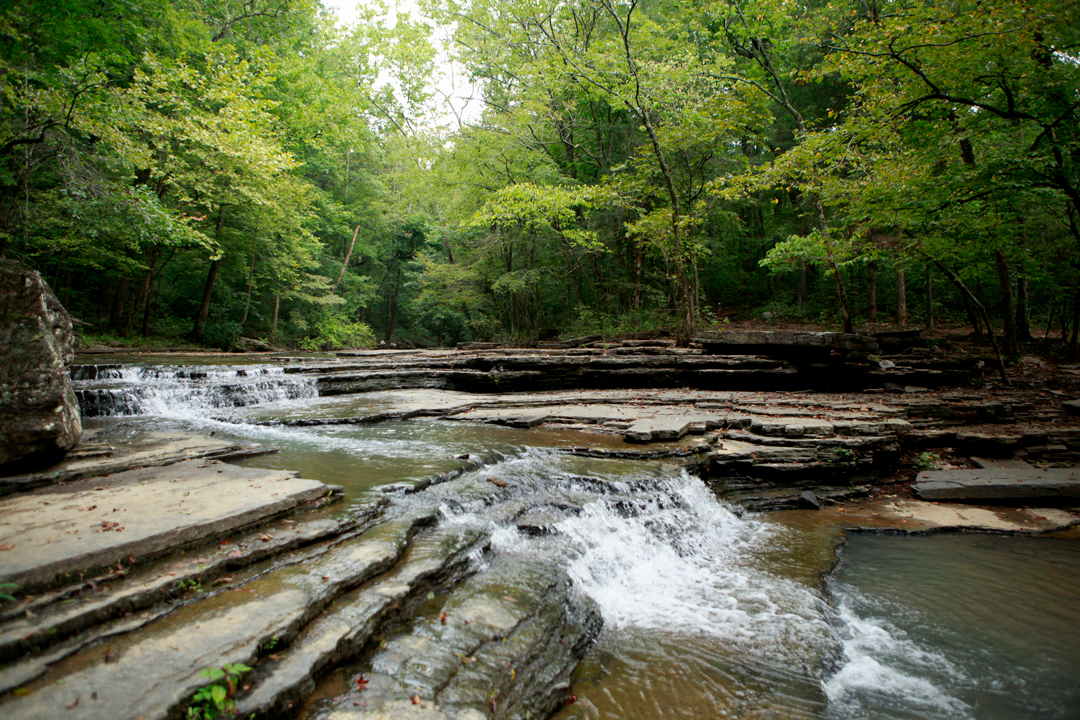 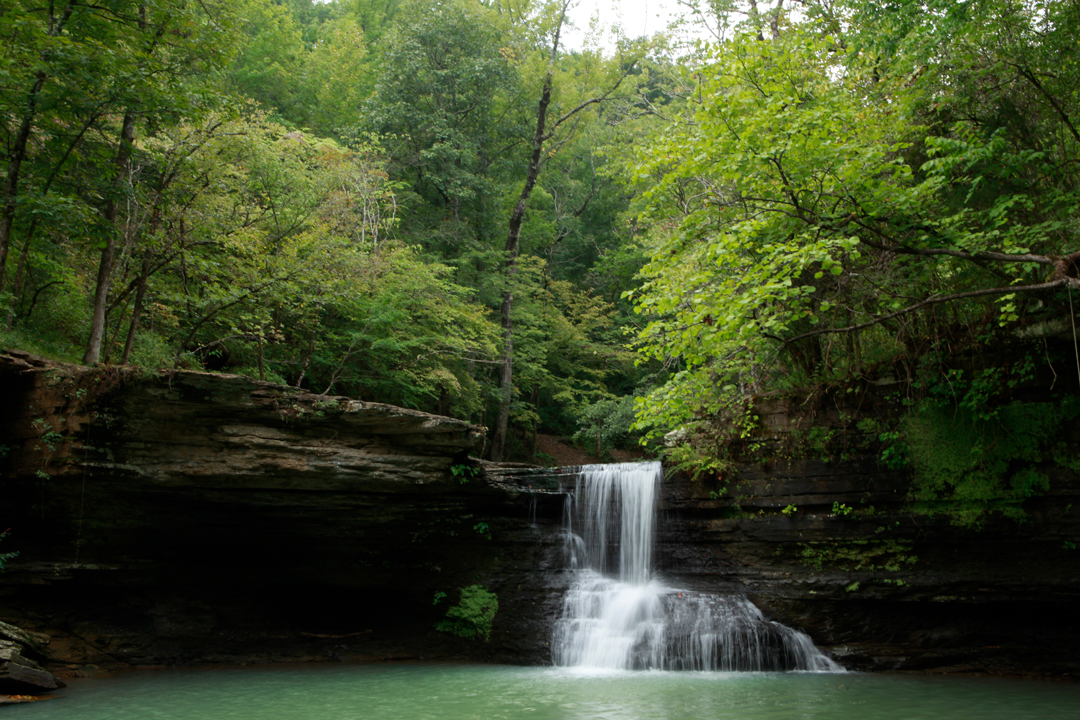 My favorite Independence Day memories happened up in Bellevue, Nebraska. My dad and I would go to professional shows, sure, but several years we’d also go walking around the neighborhoods as hundreds of households launched their own pyrotechnics. I remember walking along a street on a hill and seeing the rest of a subdivision laid out below on one side, bursts of sparks continually popping up here and there like whack-a-moles. (A TV station yesterday caught an spectacular version of this in Los Angeles).

Fireworks have plenty of drawbacks, with all of the pollution and anxiety and injuries they can cause for people and other creatures. I still find a lot to love in the pops sounding in every direction as crickets and cicadas buzz and lightning bugs flicker, the haze in the streetlights below the stars, the simple fact that all sorts of people are making their own little contributions to the night’s biggest show. You could hardly ask for more summer than that. 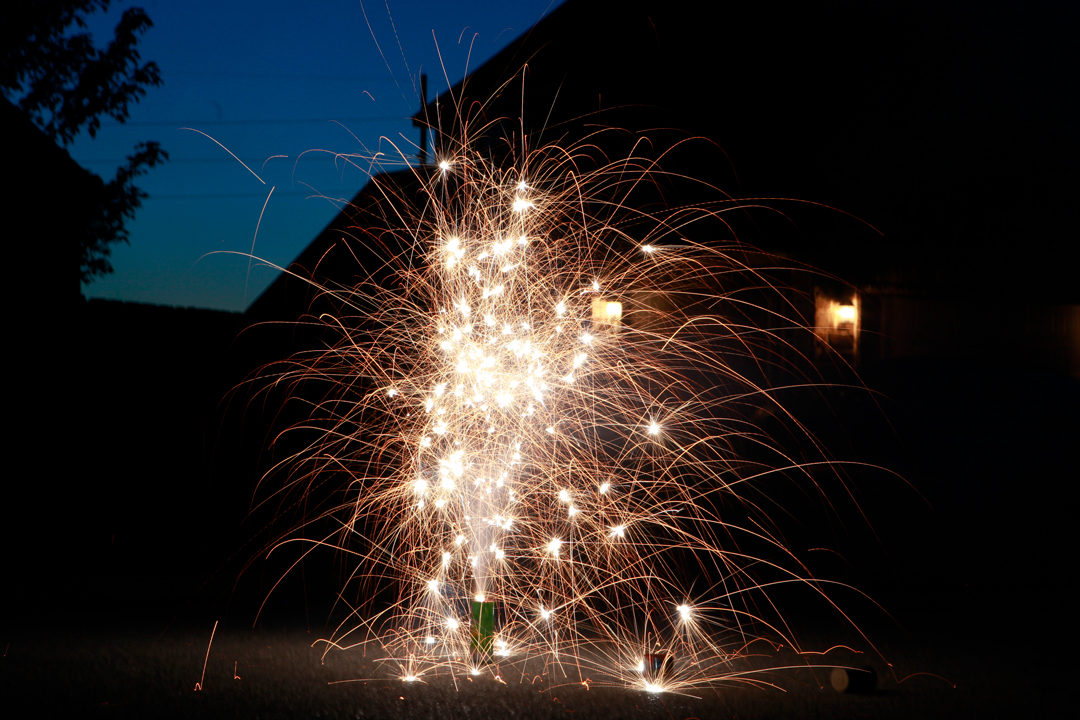 My Fourth of July this year was filled with this sort of amateur celebration, which often makes up for lack of scale with charm and camaraderie. Earlier in the day, I followed a neighborhood parade just a few blocks away from home near downtown Rogers. It’d been a few years since I’d caught one for the holiday. 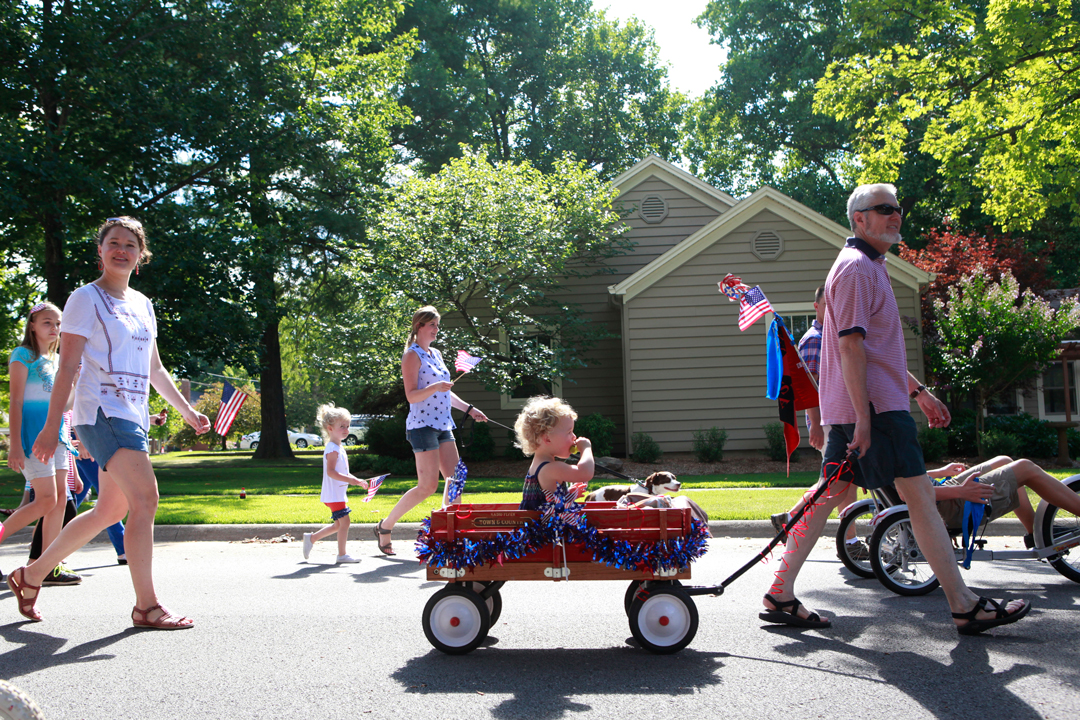 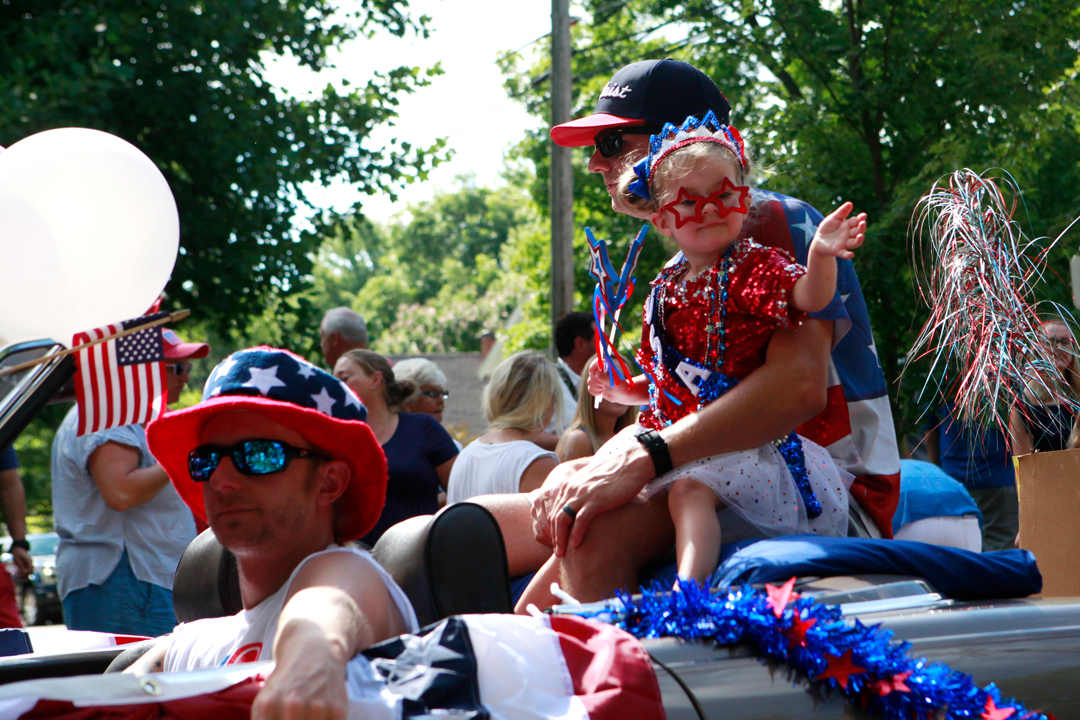 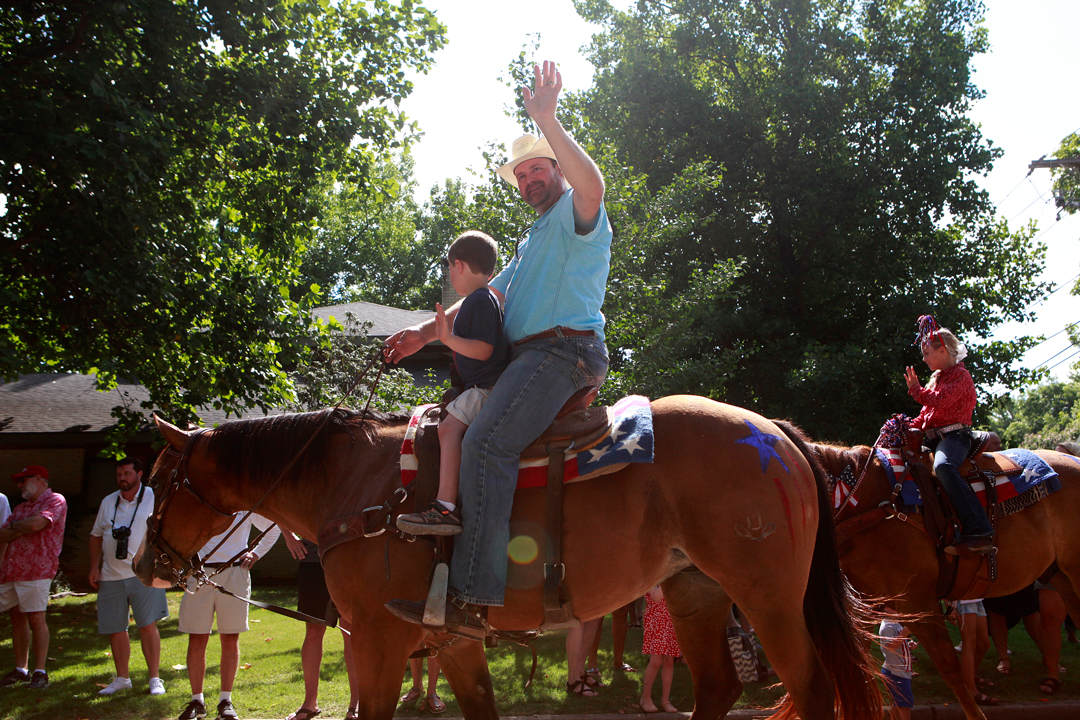 Thanks for looking, and I hope your holiday was safe and happy. 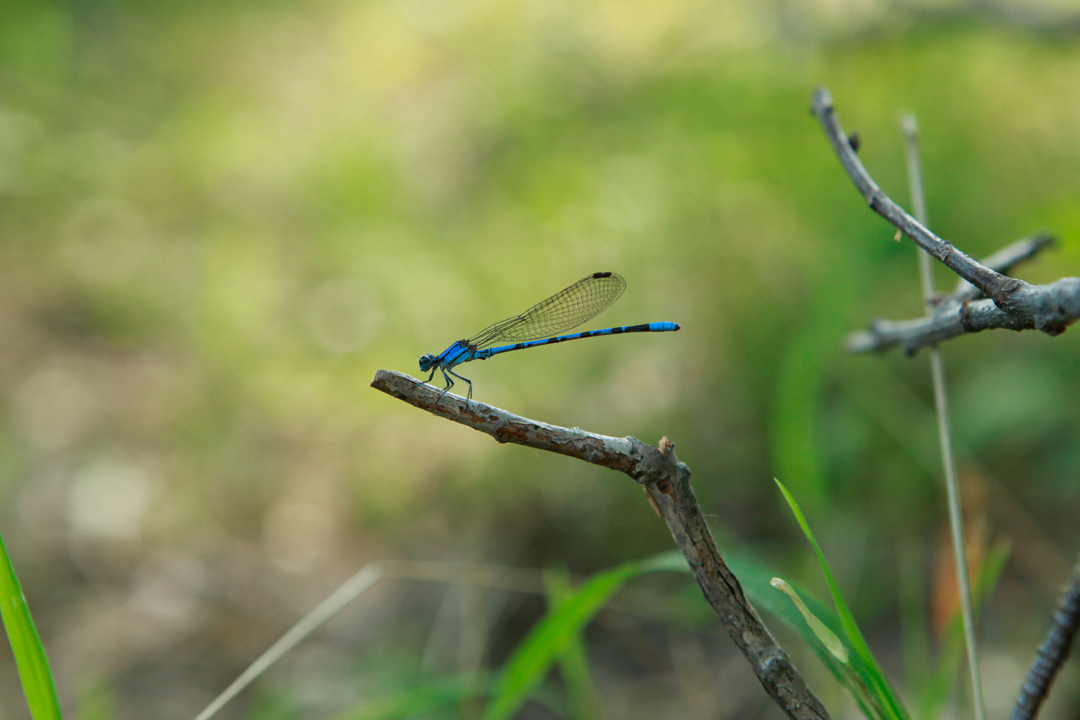 I got a dose of wildness right next to a Sam’s Club and an interstate highway in Fayetteville. A 121-acre wetland prairie called called Wilson Springs Preserve sits there, owned and managed by the nonprofit Northwest Arkansas Land Trust. It’s strange in some ways to call the place wild: A lot of human effort and machinery is almost done mulching trees and invasive shrubbery to get it back to its original state. But, to me, it felt wilder than some others I’ve hiked.

It might be because of the green and blue and white and gold-flecked dragonflies that continuously zoomed around me, or the vivid, metallic ebony jewelwings and dogbane leaf beetles. There were the tiny tadpoles that filled short-lived puddles to the brim and later emerged as toads the size of a fingernail. I heard the huffs and grunts of startled deer and carefully stepped over two box turtles. There was no avoiding the squads of ticks, some just a couple millimeters across, pulling themselves up my legs like gung-ho rock climbers scaling a cliff. And I had two experts with the land trust on hand to introduce the area and some its inhabitants to me Friday for a newspaper article. They’re probably the real reason for how I felt about the preserve. They helped me see it’s thick with life.

Speaking of that article, here’s what’s happening: The land trust works to either preserve or restore tracts around this corner of the state and is launching a campaign to bring 5,000 more acres into its protection in the coming years. The trust says wetlands like this one and other pieces of land, even farms, can clean rainwater and soak up its floods, protect rare species of fish and reptile and insect — the benefits go on and on. I’ve got a lot more information in the story here.

I didn’t have my camera with me Friday, and with all of these living things buzzing or growing in every direction, I had to go back. So I was up with the bugs the next morning. 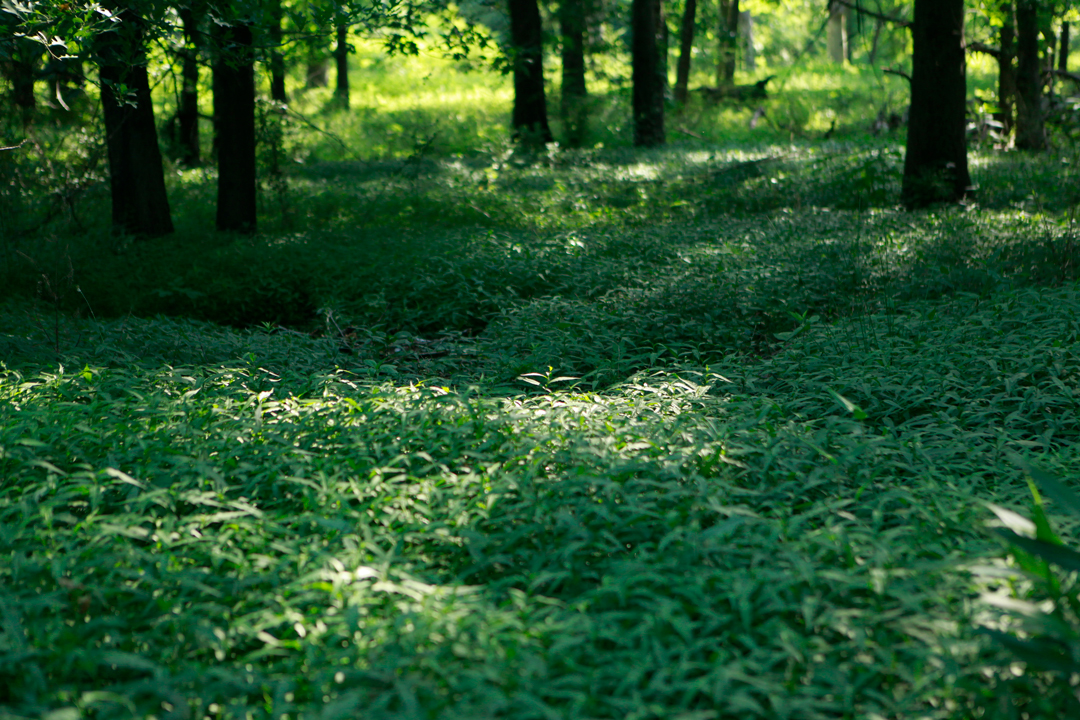 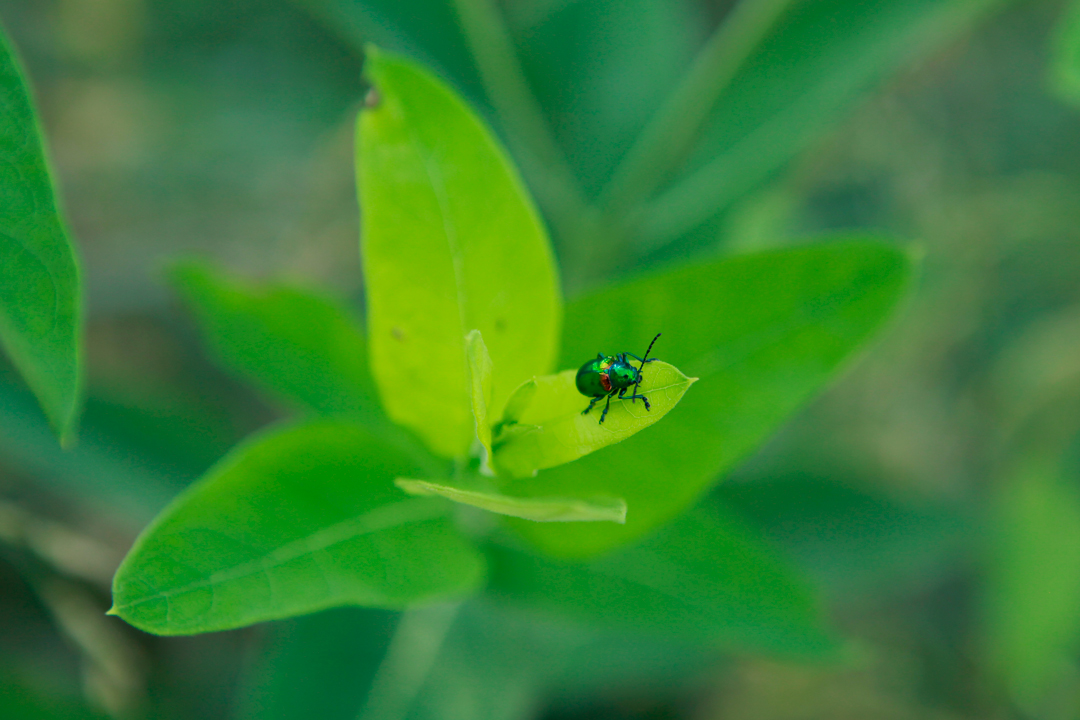 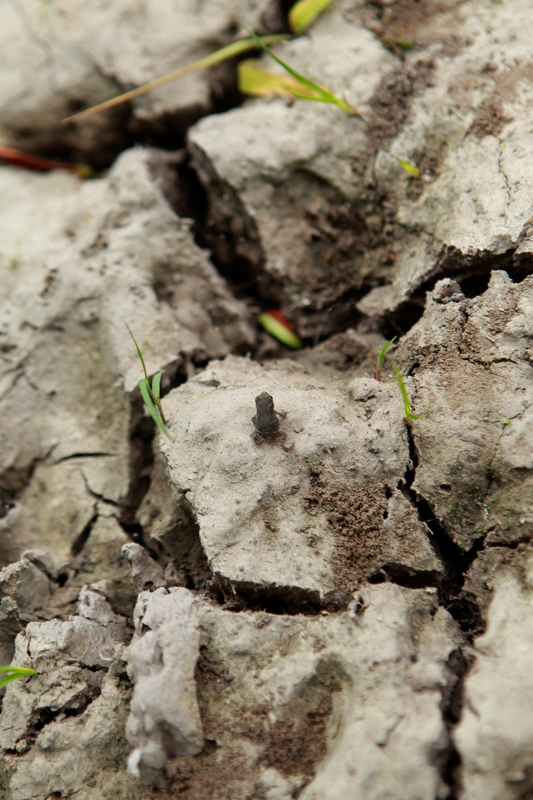 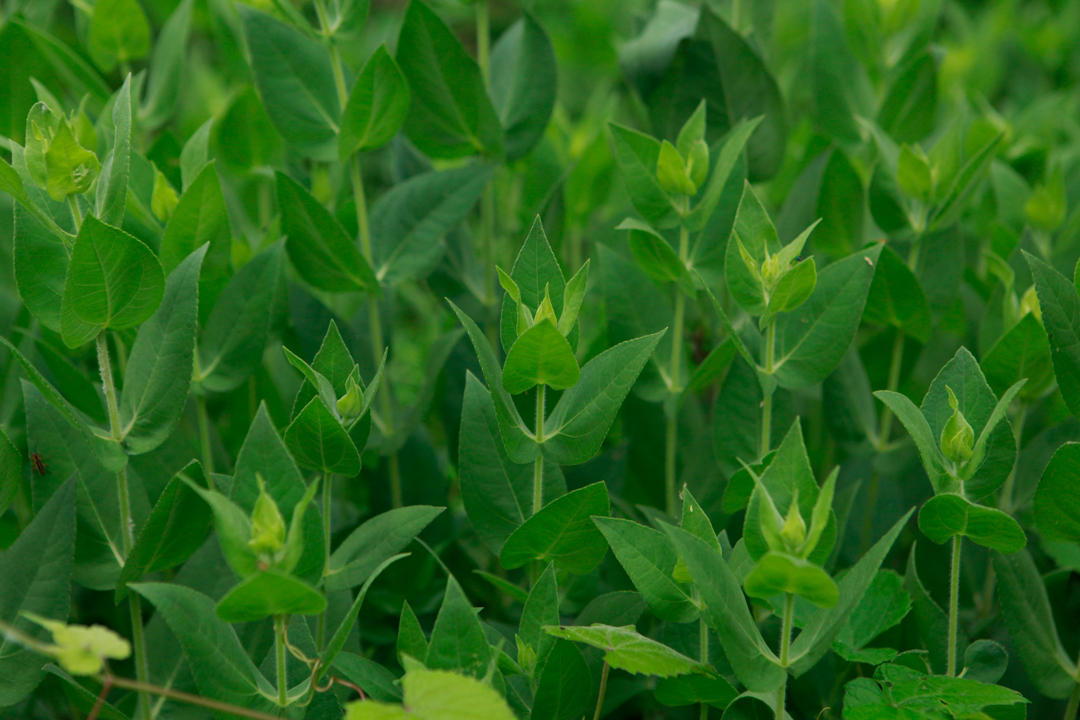 The land trust holds tours here, but the preserve generally isn’t open to the general public; I had to sign a waiver to get in. Trust director Terri Lane told me it could open fully sometime in the next year or so. If you end up going one way or another, I’m not kidding about the ticks. I recommend a good coating of repellent, khaki pants to make the bugs obvious, and a thorough screening when you get home. That’d probably be a good approach for any hike, really, since tick-borne diseases are surging around the country. But don’t let the ticks stop you.