Here’s a weird little thing: Who left this coiled track in the snow? Someone who didn’t leave human tracks within 20 feet. . . #weird #savagemn #minnesota #eveningstroll #photography #winter #snow #twilight #sunset
Echo . . #photography #stpaul #winter #snow #minnesota
Folks, the ice is at it again. With temperatures right around freezing, Minnehaha Creek is caught in an equilibrium between frozen and liquid, going back and forth between the two and carving shapes that wouldn’t look out of place in biology or geology. . . . #photography #macro #macrophotography #ice #winter #nature #outdoors #naturephotography #minneapolis #minnesota #midwest #minnehahafalls
So long, 2019, and a happy new year to all of you. #2019 #yearinreview #photography #happynewyear
White Sands, our newest national park, where wind and life leave their marks on the gypsum grains. . . . #photography #nature #naturephotography #whitesands #newmexico #southwest #desert #nationalparks #hiking #outdoors #publiclands
Smile: Yoga 4 You studio in Savage turns 10, in this week’s @savagepacer. Yoga’s taking off around here; I’ve taken more yoga photos in the past few months than in the rest of my life. . . . #yoga #savagemn #onassignment #photography #photojournalism

Martin Luther King, Jr. was 26 years old when he helped organize and lead the Montgomery Bus Boycott and brought nonviolence and civil disobedience to the nightly news. He was 34 when he described a dream of racial equality to 250,000 people. He was 35 when the Civil Rights Act outlawed segregation and he marched from Selma. He was 39 when he was shot down.

In other words, he was young. He wasn’t even middle-aged when he built those bridges to a better country.

Yesterday’s march, vigil and banquet in downtown Fayetteville focused on today’s 20- and 30-somethings. The push for social and political equality isn’t over, marchers said again and again, and it’s going to need new Kings. Hundreds of people came out. I wrote about it all for today’s paper.

I was thrilled for the chance to cover this day — the timing was perfect.

Nationwide protests against the deaths of people of color at the hands of police continue. This year is the 50th anniversary of the push for voting rights in Selma. A movie dramatizing the marches from that Alabama town — and the sometimes deadly police and civilian brutality that met them — is out this month. Marchers of every age and color Monday chatted and laughed together, then joined in hymns and chants that rang out during demonstrations decades ago.

Our history and present feel particularly connected these days. It’s an amazing time for a journalist to dive into these complex, immensely important issues. I was glad to be there, and I hope my story did the day justice. 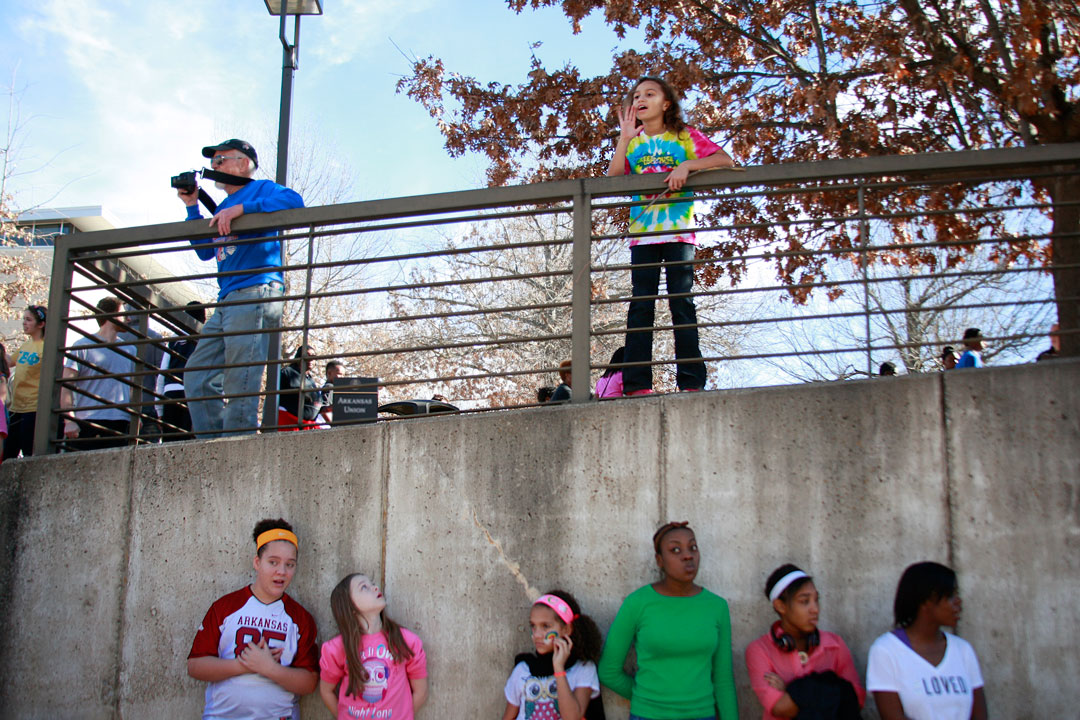 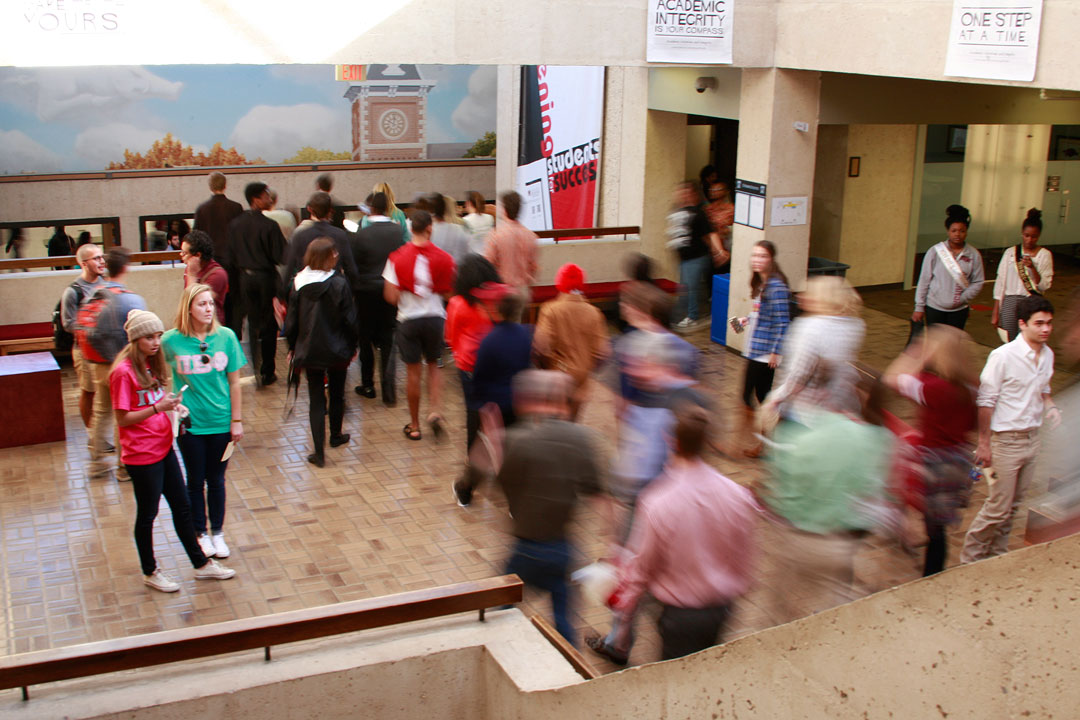 The University of Arkansas hosted the post-march vigil, and in a speech there, Arkansas State Rep. Eddie Armstrong of North Little Rock addressed the students directly. He called on them to use their education to keep building those bridges to a better country, as a 26-year-old did a generation ago.

“The leaders of tomorrow are sitting here in this room,” he said. “You have to take charge of the life that’s in front of you, because if you don’t, the bridges stop getting built.”

Today has been a day of protest over a St. Louis grand jury’s decision not to indict white police officer Darren Wilson for shooting the unarmed, black teenager Michael Brown back in August. People nationwide and in other countries, including a diverse bunch here in Fayetteville, gathered to voice their disgust with what they called a justice system stacked against people of color. (You can see Ben Goff‘s official photo gallery for the paper here.)

There’s a ton of passion throughout these events, obviously — in Ferguson last night, rage over the decision turned into violence. The 80 or so people here in Fayetteville stayed peaceful, loudly chanting “Hands up, don’t shoot!” and other slogans and holding signs saying the lives of non-white people still matter. 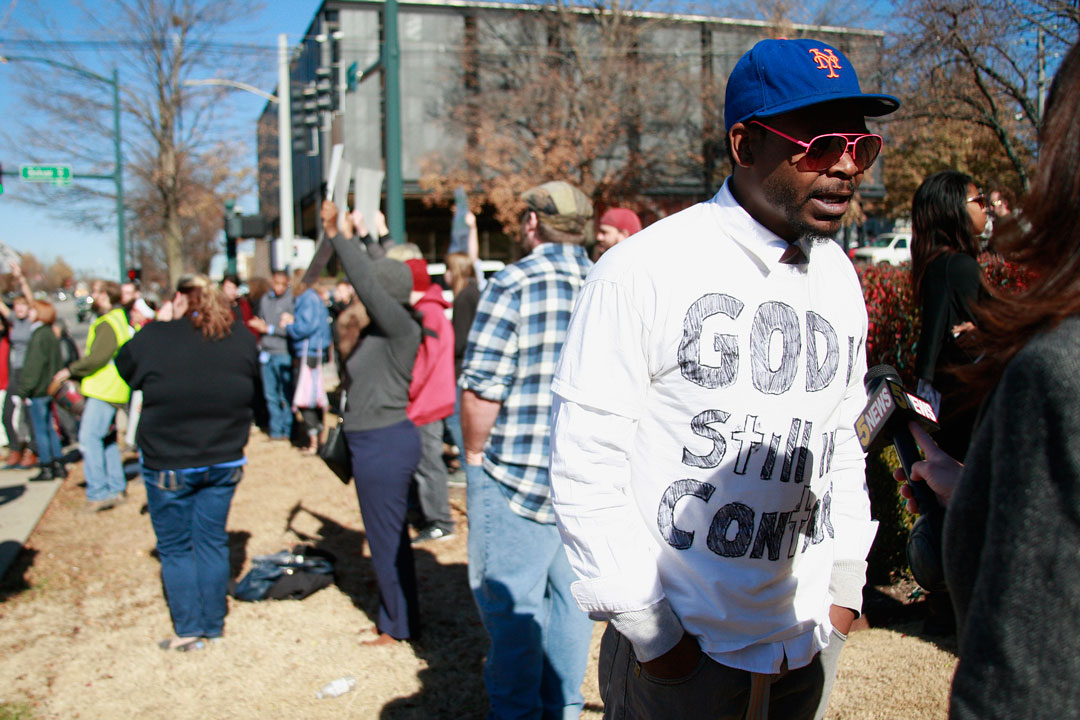 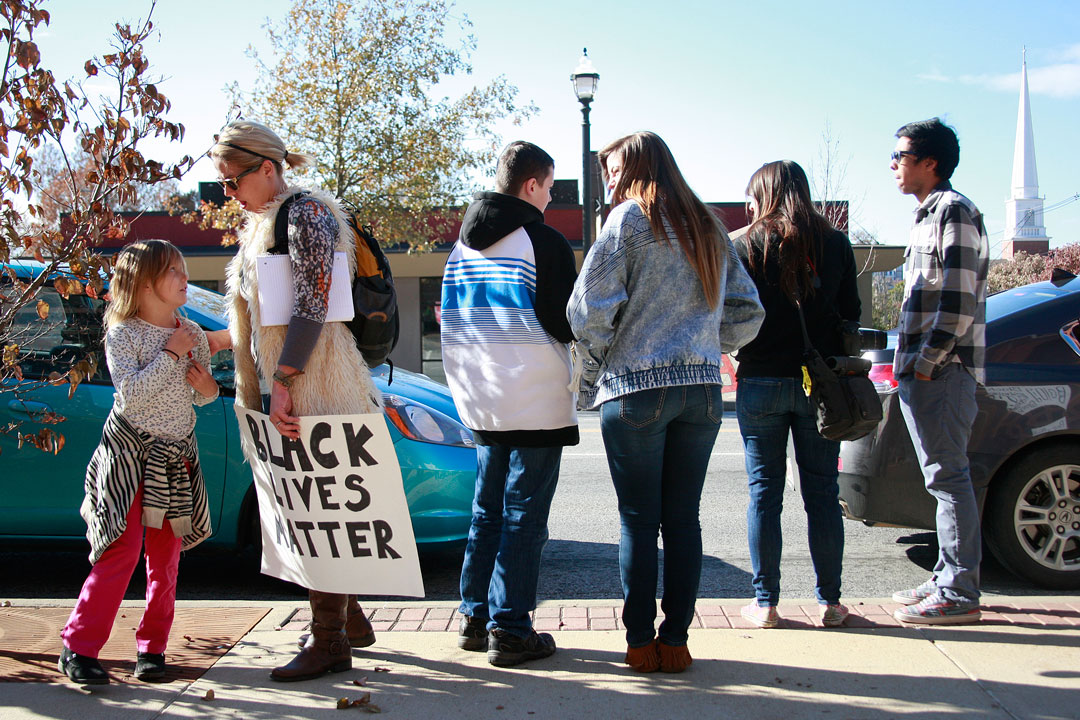 Four people were arrested after they blocked traffic for a few minutes after noon, but Fayetteville police and everyone else involved were calm during the civil disobedience and handcuffing. It reminded me of the Occupy Lincoln protests I covered back in school. Here, at least, people trusted their police. 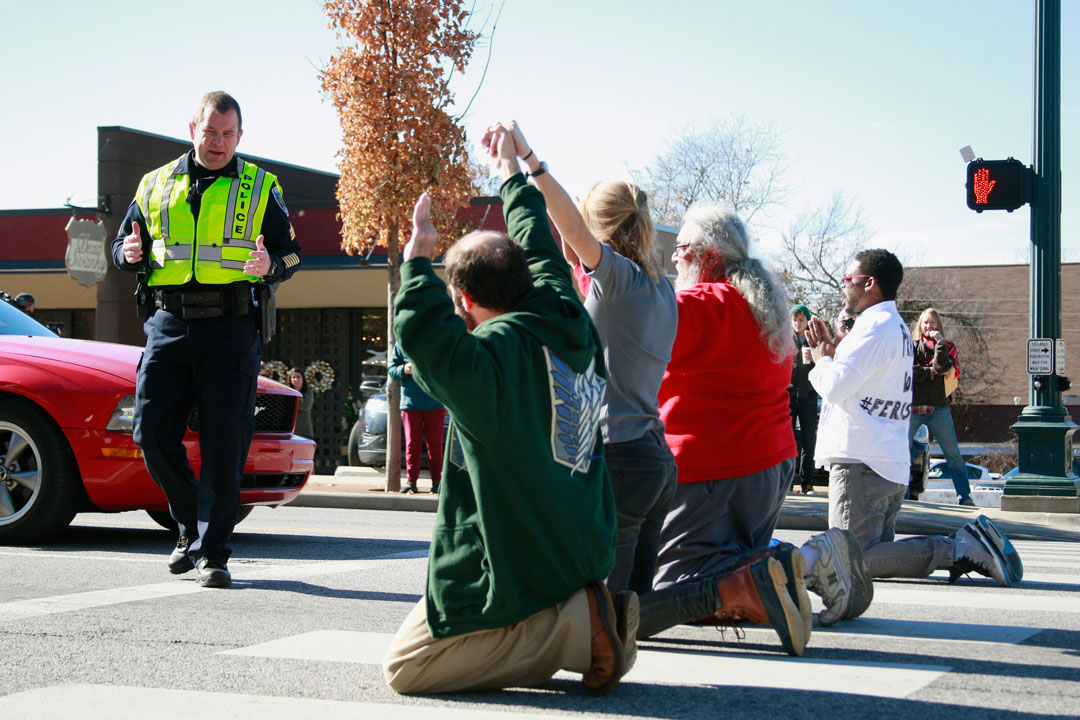 I won’t wade any further into the furious disagreement over what happened that August day; you can take a look at all of the evidence that exists here. But I do want to talk about one or two things in all of this.

A lot of people see these as coincidences, biased sets of examples or otherwise justifiable in some way. One fellow came out today with a little sign saying Darren Wilson is a hero.

A lot of other people, including the Fayetteville protesters, disagree. They instead see this situation as a pattern that won’t go away no matter how hard they try. That’s what the protesters were fighting, they said.

As for me, I want people to be and feel safe around cops. I want people happy and safe in their skins. I hope the people working to make these things happen, whoever they are, succeed. I can’t say much more and remain an observer. 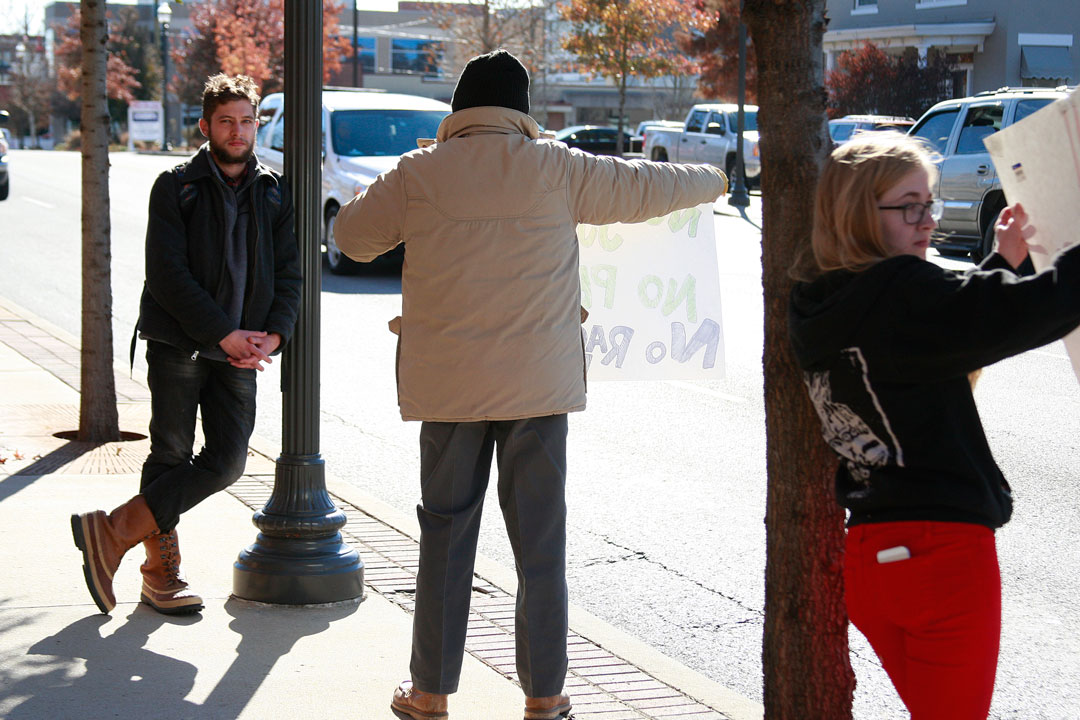 I also hope you’re happy and safe. Thanks for looking.